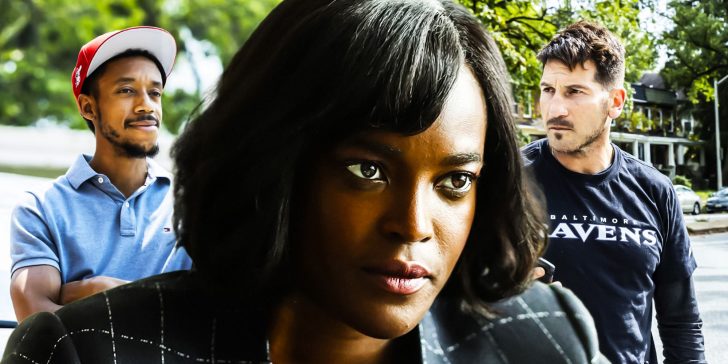 The HBO miniseries We Own This City is based on the investigation into and reform of the Baltimore Gun Trace Task Force, a group within the Baltimore Police Department who were arrested in one of the city’s most prominent police corruption scandals. Much of the series is drawn directly from reporting and the legal indictments against the task force. There are some changes to create a more compelling narrative, but for the most part We Own This City is very faithful to the scandalous true story it is based on.

We Own This City sees The Wire writers David Simon and George Pelecanos returning to the setting of Baltimore and its ongoing issues with crime and policing. As with other Simon miniseries like Show Me A Hero and Generation Kill, the series is heavily based on journalism, in this case the 2021 nonfiction book We Own This City by former Baltimore Sun reporter Justin Fenton. The story is set amidst public unrest and distrust in policing following the 2015 death of Freddie Gray, which saw six police officers charged with homicide. The negligence that led to Gray’s death, and the subsequent acquittal or dismissal of charges for all of the officers, led to widespread protests and was seen by many as another example of police targeting and killing Black people with no repercussions.

Related: We Own This City Episode 1 Perfectly Flips The Wire’s “Omar Comin” Scene

John Bernthal stars as the real-life Sgt. Wayne Jenkins, the leader of the Gun Trace Task Force. The Gun Trace Task Force effectively operated as its own gang within the city of Baltimore, conducting a number of robberies and keeping the money for themselves. While the Task Force largely targeted drug dealers, unlike The Wire’s memorable Omar, they also harassed a number of people who were never charged with a crime, including stealing $20,000 from a couple arrested outside a Home Depot with no evidence of a crime. The group is believed to have stolen at least $300,000 in cash as well as hundreds of thousands of dollars worth of marijuana, heroin, cocaine, and jewelry. In addition to robbery, the GTTF was charged with extortion, racketeering, and overtime fraud, with almost all members sentenced to significant jail time. Most of the events in the series are true to life, with some small alterations. Here’s what We Own This City changes from the true story it is based on and what it gets right.

We Own This City – Episode 1

We Own This City episode 1, “Part One,” details the unlikely beginnings of the investigations that would bring down the Gun Trace Task Force. Harford County narcotics cop David McDougall, played by We Own This City cast member David Corensweet, is a real-life police officer who stumbled upon the case. 2018 reporting broadly recounts (via The Baltimore Sun) the same inciting incident as the series, with McDougall finding a young woman dead of a heroin overdose and asking the man with her, Kenneth Diggins, about where he got the drugs. In real life, however, McDougall obtained the information over an eight-hour interview instead of a brief conversation. Diggins was charged with distributing heroin and sentenced to a decade in prison.

As in We Own This City, Diggins’ information led McDougall and Baltimore County Detective Scott Kilpatrick to street dealer Aaron Anderson, who went by the street name “Black.” As in the series, robbers hit Anderson’s apartment before McDougall could get there, stealing $100,000 worth of heroin. When McDougall and Kilpatrick caught up to Anderson, they found a tracker on his car belonging to Gun Trace Task Force member John Clewell. Like The Wire, We Own This City is rooted heavily in the geography and culture of Baltimore, with even the hotel Anderson was arrested at, the Red Roof Inn, being accurate to the true story. Ironically, Clewell was the one member of the Task Force that was never charged with a crime, as prosecutors concluded that he had unwittingly loaned his GTTF colleague Detective Momodu Gondo the GPS tracker. In episode 2, Jemell Rayam comments to investigators that Clewell was “clean.”

We Own This City also broadly reflects the corrupt culture of impunity throughout the BPD. We Own This City episode 1 shows the Civil Rights Office investigating Daniel Hersl (played by Josh Charles), based on a real-life member of the Gun Trace Task Force who faced frequent allegations of harassment and police brutality but was protected by the department. Not only were the Task Force’s crimes overlooked, the Gun Trace Task Force was celebrated as a model unit within the BPD, just as copaganda TV shows prior to Black Lives Matter often glorified bending the rules to get “results.” Mayor Stephanie Rawlings-Blake, portrayed in We Own This City by Paige Carter, even had a press conference in 2016 celebrating a large bust by Sgt. Jenkins’ unit. While the GTTF seemed to be effective, they also relied upon manufacturing evidence and coercing testimony. Once the Task Force’s crimes were revealed, hundreds of cases had to be revisited, with many thrown out.

Related: We Own This City True Story: What Happened To Freddie Gray?

The 2017 arrest of Wayne Jenkins and other members of the GTTF is also largely faithful to the true story. The DEA and FBI first began investigating Gondo and later widened their net to include the rest of the Task Force. The series is also accurate in depicting that Jenkins was brought in under a false pretense, although in real life he believed he was receiving a promotion instead of being questioned about damage to a vehicle.

The first episode of the six-episode We Own This City miniseries largely sticks to reality, but it does somewhat fictionalize the prosecution side of things. While the U.S. Department of Justice did conduct a civil rights investigation into the BPD in the wake of the Freddie Gray killing, Wunmi Mosaku’s character Nicole Steele is fictitious, possibly a composite of several real-life investigators. However, other characters involved in the investigation, such as Erika Jensen and John Sieracki of the FBI and homicide detective Sean Suiter, were based on real people of the same name. Overall, almost all the events in We Own This City episode 1 were heavily based on reality.

We Own This City Episode 2

Episode 2 of We Own This City skips between several different time frames, including Wayne Jenkins’ initiation into the Baltimore Police Department between 2003 and 2005, McDougall’s investigation into the GTTF, and the events immediately following Jenkins’ arrest in 2017. While it starts with Jon Bernthal breaking the fourth wall and includes some fictionalized scenes, the episode highlights several real-life cases of abuse at the hands of the BPD.

The beginnings of Jenkins’ time on the force roughly correspond to reality. The real Wayne Jenkins joined the BPD in February 2003, after having spent time in the Marines and having been previously rejected by the Maryland State Police. During this period, Baltimore had adopted a harsh new policing strategy aiming to deal with the city’s rapidly rising crime rate. Mayor Martin O’Malley, the basis for the Tommy Carcetti character in The Wire, was inspired by New York mayor Rudy Guiliani’s “tough on crime” approach and brought in NYPD veterans Ed Norris and Kevin P. Clark to serve as successive commissioners.

As depicted in We Own This City episode 2, this strategy involved making mass arrests in an attempt to clear the streets. This approach was also featured in early seasons of The Wire, and created distrust between police and civilians. We Own This City’s events are meant to represent the general trend instead of depicting a particular incident, but they do illustrate how many arrests were made, generally of Black people in poor neighborhoods and without any reasonable crime being charged. In We Own This City, police threaten a man with a loitering arrest for sitting on the stoop of his own home, and at least one such arrest actually took place. Jenkins himself was involved in over 400 arrests in 2005, sometimes as many as six per day. While individual incidents may have been fictionalized, the indiscriminate approach to policing depicted in this episode was very real.

The incident where members of the GTTF stop a car for a seat belt violation and end up taking $11, 000 was also based on reality. The Task Force, which includes The Wire actor Bobby Brown as Thomas Allers, often used seat belt violations and other minor issues as a pretense for stops and seized large amounts of cash without criminal charges. We Own This City also makes reference to another BPD scandal when Jenkins shouts “Free Laronde” during a meeting, a reference to BPD officer Fabien Laronde who was banned from city courthouses for filming witnesses and was later fired and charged with assault.

The many abuses of Daniel Hersl really were named in a rap song by Baltimore artist Young Moose, who had multiple run-ins with Hersl. However, there is no evidence that he talked to the DoJ or any other authorities. And, as noted above, the Nicole Steele character is fictional. This is another example of how, like The Wire, We Own This City episode 2 mixes several real-life outrages with fictionalized events meant to be representative of general trends in Baltimore policing.

NEXT: How Michael K. Williams’ Most Famous Role Changed TV

New episodes of We Own This City are released Mondays on HBO Max.

Is The Arrowverse In Trouble? New Cancellations Are Another Bad Sign

Rob Hutton is a feature writer for Screen Rant. He has a PhD in English and has previously been published by both academic and popular publications. Rob is a lifelong fan of science-fiction and fantasy. In his spare time Rob watches old television, watches weird movies, and writes an unpublishable novel.