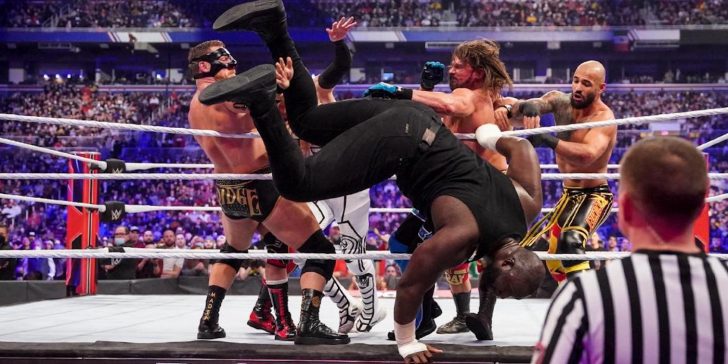 Yesterday, Vince McMahon did an interview on The Pat McAfee Show, hosted, as you might guess, by former NFL punter turned podcaster and WWE SmackDown color commentator Pat McAfee. While it probably would have been a good idea to—interviews with McMahon have tended to be rare, and are increasingly so has he ages — I made the decision to not cover it, on Twitter or in this space.

While analysis of interviews like McAfee/McMahon is interesting, the truth is that I’m not a great analyst of the real life business of professional wrestling. I’ve always been interested in wrestling as a narrative, and while the narrative of wrestling, especially in the United States of America, runs through Vince McMahon (and will for the foreseeable future), my knowledge of him as a man and as a businessman is entirely second- or third-hand, far too distant for me to feel comfortable doing anything more than bust on him for being a rich dude who wears ill-fitting shirts.

But BT Sport, the WWE’s broadcast partner in the United Kingdom and Ireland, posted a photo with a quote from the McMahon interview about the difference between WWE Superstars and professional wrestlers, complete with one of those smug-looking emojis you normally post when you’re absolutely confident in something you’re saying despite it being completely stupid.

Vince McMahon on why they are WWE Superstars…

It reads: “The reasons we call them superstars and not wrestlers is because anyone can wrestle — either poorly or well. Do you want to be a professional wrestler or a WWE Superstar? WWE Superstar sounds a whole lot better.”

This, I feel like I can talk about, to some extent. I love rhetorical devices and I love little tricks of branding, and “WWE Superstar” is both of those things in one package, something vague enough be at once harmless and threatening. So let’s dig in.

First, look at the phrase “WWE Superstar” and ask yourself what it means. “Professional wrestler” isn’t off the table, the people who fall under the category “WWE Superstar” are wrestlers, whether they do it poorly or well. It’s an annexed phrase, something that tacitly goes into what makes somebody who wrestles for WWE a “Superstar.” There are other pieces to the puzzle, obviously. Creative goes into it. Television production goes into it. A thousand little bits and pieces fly around and collide, bounce off and stick, whether it’s music or make-up or the chance to cut a promo or the decision to create and push merchandise.

There’s a temptation amongst a certain group of fans to take all of that and credit it to the WWE machine, Vince McMahon in particular. (McAfee did so to some extent during the interview.) But wrestling, particularly on WWE’s level, is a strange animal, and I’m not sure many people understand it beyond what they see on television, as it’s presented. You can dress a person up in everything WWE is capable of fashioning, but the person underneath all of that is not a mannequin.

Like a movie or television show, televised wrestling is a collaborative artform. The task of the wrestler is to occupy the character that’s been created for them within the scenarios they’re written into, primarily promos and matches. Setting aside the potential for a bum match (which is also a collaborative endeavor), a wrestling character lives and dies on how well it is written, produced, and ultimately performed.

Maybe this seems obvious, but I’m not so sure. When a wrestling character fails on a week to week basis, it’s blamed on creative. When the wrestler portraying that character is cut, it’s often blamed on the wrestler. These are not independent bodies, and the WWE Superstar, unlike an extremely talented indie wrestler, is not the sole creation of any one person. They’re partnerships, and partnerships succeed and fail.

But can you take all of this and call the end result a professional wrestler? Yes. Despite the manpower that goes into creating a WWE Superstar in 2022, there isn’t a lot of space between its characters and the WWF of 1999, 1992, or 1985, to say nothing of its competitors and the territories that existed before it. Wrestling characters, even the high concept ones, work as parodies of kinds of people that exist in real life or other forms of entertainment. Not to take away from the very real effort that goes into creating these characters so that they work in the context of a wrestling ring, but the person who really makes a WWE Superstar is the wrestler in the role, however aided or handicapped they are by creative. Without going so far as I have, Vince McMahon alludes to this before talking about the difference between a professional wrestler and a WWE Superstar.

The truth, however, is that that’s all bullshit.

What I’ve described above is an actor taking on a role and performing it. This concept, the separation between, say, Paul Dano and the Riddler, is one we’re perfectly capable of understanding. For wrestlers in WWE, it’s a bit different. They’re not actors or professional wrestlers, they’re WWE Superstars, a nebulous phrase that encourages us to think of wrestlers as an extension of a 24/7 live, archived, and streaming service, like characters at Disney World, metaphorically wearing their costumes even when they’re off the clock.

The WWE Superstar is a marketing tool, something that burnishes the first word in the phrase by anonymizing the wrestler who is the second. It’s a weird trick, I admit — one assumes that a wrestling company would want there to be as many recognizable, marketable faces as possible on the roster — but something that often gets lost in thinking about how WWE operates as a company is that its business model shifted from one that prioritized that kind of IP generation to one where no one WWE Superstar is capable of drawing more than the WWE itself.

There are, to paraphrase John Cena, faces that run the place, and they get to do things like skip the Saudi Arabian shows or take time out due to COVID concerns, but the presence or absence of a Daniel Bryan, Roman Reigns, Brock Lesnar, or Cena doesn’t really hurt WWE, which has generated record profits regardless of which pieces they have in play at any point in time. When Adam Cole and Bryan Danielson debuted in AEW on the same night, there was no effect on WWE’s business. They’re above talent defection or buzz or bad press — Cole and Danielson were just former WWE Superstars. Now they’re professional wrestlers. To Vince McMahon, the former sounds a lot better. It doesn’t, obviously. Once you look beneath the incredibly thin surface where guys like Reigns and Becky Lynch live, the world of the WWE Superstar is one that is rich in talent and creatively dead in the water. Between 50/50 booking and repetitive segments, WWE Superstars are kept in a holding pattern, winning and losing without meaning until it’s time for one of them to gain momentum because a champion needs a challenger.

Booking a wrestling show like this means that nobody loses their value, but it also means that nobody has much. It means that when wrestlers like Big E or Kofi Kingston win a world championship, they can lose it without fans losing interest or not buying New Day merch. You can accuse creative of being lazy, but it’s not: it takes extremely hard work to make a roster as talented as WWE’s spin its wheels under the yoke of being a WWE Superstar.

Why is it like this? Because having a talent so popular that he’s worth more than the brand is something WWE has done before, and because living like that as a business is terrifying. Hulk Hogan leaving for WCW in 1994, long after his peak, didn’t hurt WWE that badly, but Steve Austin leaving WWE over creative disagreements in 2002 did. Completely helpless in that situation, the company tried to paint Austin as the villain, claiming he “took his ball and went home,” or, in other words, that he wasn’t willing to be a WWE Superstar. The implication was that Austin’s absence hurt the fans. The reality was that it hurt the bottom line.

It’s manipulative. So is the notion of the WWE Superstar. The average person pays to see that brand, not AJ Styles or Chad Gable or Liv Morgan or Naomi. It’s a body that changes and shifts all the time. People are added to it, people are removed from it. But the body remains, and so does the audience.