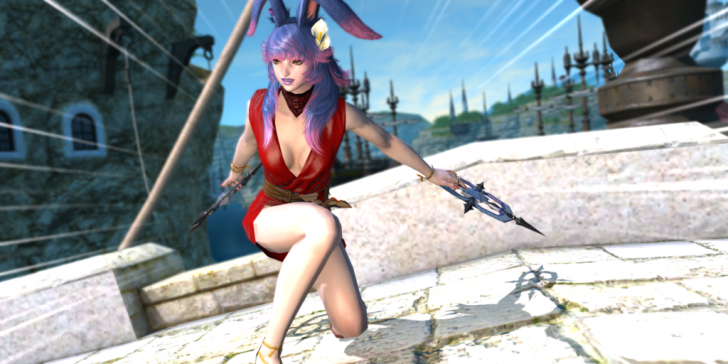 In FFXIV, “desynth” or desynthesis if you want to bother typing out the whole thing, is a sort of reverse crafting. It’s the process of breaking down certain items into other resources. Usually this provides Crafting Catalysts — otherwise known as shards, crystals, and/or clusters — as well as one or more basic crafting materials. Though there are some exceptions. It’s an extremely useful and potentially pretty profitable skill to develop. Except there’s no real “skill” involved on the part of the player. Except for when it comes to decide when to desynth and whether or not it’s worth it. Let’s take a look at what that means in our guide on how to desynth in FFXIV!

How to Desynth in FFXIV

This is the easy part; you just click on an item and select “Desynthesis” from the list of available options. Note, however, that not every item in Final Fantasy can be desynthesized. This is pretty easy to tell. If you can’t desynth the item, then the option to desynth simply won’t appear on the list of available actions. Once you do select Desynthesis, the process is automatic. Your character will perform a brief animation that destroys the chosen item. Once that’s complete, a new window will appear onscreen that shows whatever items you got in exchange!

This process first requires two things: a Level 30 crafting class and completion of the Level 19 Main Scenario Quest “Life, Materia and Everything.” This, in turn, unlocks the side quest called “Gone to Pieces.” You can start it by speaking to Syntgoht in Ul’dah – Steps of Thal (X: 14.0, Y: 10.0). This short mission then unlocks desynthesis permanently across all crafting classes. There’s no minimum level requirement to desynth as any such class. Nor do you even need that class equipped. You just need the appropriate type of crafter unlocked on your character for each item.

For example, a Dark Knight sword might require the Blacksmith class to desynth. You can do this at almost any time, with any class or Job active, just by selecting the sword and using Desynthesis. Desynth then has its own unique experience bar shown beneath each class’s name. That bar and its corresponding level rises any time you desynth something, depending on which class is associated with the item. Blacksmith is associated with crafting metal weapons, like Dark Knight swords, so it would typically take your Blacksmith Desynthesis Skill into account. Though there are exceptions and differences between every patch.

These desynth levels don’t mean much in practice. They’ve been made less vital over time as the FFXIV desynth system has been streamlined. These days they basically just raise the chances of getting more and/or higher quality items from each desynth action. Every item has a Desynthesis Skill level associated with it, which you can read by selecting said item. If your level is higher than that number, you have a bonus chance of getting better materials in return.

Items that you can desynth usually include:

Fish are the obvious outlier here. Though they’re not necessarily less useful — particularly now that spearfishing is such a fast and easy way to catch fish en masse. In fact, most fish in FFXIV aren’t used for crafting. Those that aren’t used for food made by Culinarians are typically meant for player housing. That means decorative imprints and aquariums. Most players don’t have houses. And even those that do, as well as apartment owners, might not want aquariums or fish paintings. In such cases your best use of these fish is desynth.

Fish typically provide two things via desynth: Water Crystals and Fine Sand. Lower and higher-level fish can of course produce Water Shards or Water Clusters, as well, but you get the idea. Fine Sand is the unique bit. It’s a crafting material used in several types of in-game housing decorations. It’s also exceptionally common and not typically worth much on the Market Board.  Nearly every fish in the game (all the ones you can desynth) produce Fine Sand, after all. It’s still better than nothing. Much more rarely, high-level fish can produce things like Allagan Gold Pieces and Materia from desynthesis. The Allagan trade-in items can be sold to NPCs for gil — with rarer pieces selling for more.

This is also probably a good time to mention that you can auto-desynth an entire stack of items. Just toggle the option “Desynthesize entire stack.” This will go through the whole pile of that item, one by one, without you needing to manually desynth everything!

When & What You Should Desynthesize in FFXIV

When you should desynthesize something is a matter of opinion. Though the general answer is “when it’s no longer useful for anything else.” Especially if it’s getting in the way. Since most desynth items are gear, they tend to be things that would otherwise clog up your Armoury Chest and inventory.

Ever roll Greed on a pair of Bard gloves you’ll never use? Got a lot of junk from Retainer ventures? Desynth it! Technically it won’t free up any inventory space on its own, since the crafting materials you get in exchange take up slots. However, unlike dungeon equipment, you can sell these materials on the Market Board. That or use them to craft something yourself.

This can be more valuable than simply selling the armor or weapons to an NPC vendor — particularly when you factor in the crafting crystals and the long-term value of the desynth XP you earn. The higher your desynth level gets, the less desynth XP you get from low-level items, until finally items that are too low-level hit a cap don’t give any XP at all. You don’t get any permanent XP out of this exchange but you do get that bonus chance of better rewards. The materials might still be less valuable than just selling the gear, but not usually. NPC vendors rarely offer much gil for anything that isn’t a specially designated junk item (e.g. Allagan Gold Pieces). Though up-to-date gear obviously produces more up-to-date crafting materials you can flip to other players. One or two strips of leather here and there isn’t a lot, but it adds up over time.

This also doesn’t account for Demimateria. This is a unique crafting material that doubles as vendor loot. There’s a small chance of acquiring some when desynthing all sorts of gear in the game. You can also sell this to other players. Many types of Demimateria are used in crafting recipes for popular glamour items: glowing weapons, nice armor, etc. Others are used for in-game furniture. Even ignoring that, most Demimateria sells for hundreds or thousands of gil to NPC vendors, similar to the Allagan trade-in items. This is a great way to make extra cash over time even if you don’t feel like bothering with the Market Board. Many FFXIV players simply pass on old dungeon or raid loot while running Duty Roulettes, so as not to clog their own inventory. You can swoop in and pick up that forgotten loot for free, desynth, and flip the resulting materials — including Demimateria.

The general rule of thumb is to simply always check the Market Board. Many players also make the mistake of selling Demimateria for lower than what they would get at an NPC vendor. That’s before you even consider virtual tax rates that chew into your profits. If you can sell it to an NPC for more than you would get on the Market Board, save yourself some time and inventory space. Just get rid of it.

The same goes for things like fish. Sure: a handful of Water Crystals, Fine Sand, and maybe an Allagan Tin Piece aren’t worth much on their own. But does that fish sell for more on the Market Board? Can you sell that fish on the Market Board? Check the sales history and you might see that nobody has bought one in months. A single Blue Shark listed for 5,000 gil on the Market Board is useless to you if nobody buys it. Desynth it instead.

Another factor to consider is simple fashion. Dungeon and raid gear can be annoying to farm; you might not get the same piece to drop twice for a long time. If you do manage to get something, either from a Retainer or inside the dungeon itself, consider using the “Try On” feature. This will show you what the gear looks like on your character. If you like the look of something you can always drop it in your Glamour Dresser for safekeeping and apply it through Glamour Plates. This is, of course, entirely a matter of taste. But the Shisui armor from “Shisui of the Violet Tides” and Bonewicca gear from “The Swallow’s Compass” are two popular examples.

A Note on Culinarian & Alchemist Desynth

Most of the crafting classes are pretty straightforward when it comes to desynthesis. You need to have Carpenter unlocked to break down wooden items. You need to have Leatherworker to desynth leather items. You can probably see where this is going… The two major exceptions to this rule are Alchemist and Culinarian. Both have slightly unique rules, since they both primarily create consumables.

We already went into the fish issue a bit higher up. Fish are, so far, the only items you can desynth as a Culinarian. This is a bit of a blessing in disguise. Fish are much easier and cheaper to acquire in great quantities than armor and weapons. Spend a few minutes spearfishing and you’ll acquire dozens of the suckers, resulting in even more Water Crystals to use as you please. Water Crystals, Shards, and Clusters are then used in most Culinarian and Alchemist recipes. This is especially important since those crafting classes make some of the best Collectables for farming Crafters’ Scrips.

Speaking of Alchemist: They’re the toughest class to desynth with in FFXIV. You can’t dissolve potions, food, or intermediate crafting materials like alkahests. That just leaves books. The magical kind. Alchemists are responsible for crafting the weapons used by Summoner and Scholar — tomes and grimoires — and pretty much nothing else in terms of equipment. At least for the time being. This makes it quite tricky to reliably level up your Alchemist Desynthesis Skill. Then again, since this skill is only used to determine bonuses from desynth, you don’t lose out on much. Not unless you specifically want to desynth lots and lots of high-end Summoner/Scholar grimoires in particular, for some reason. Though you can always buy grimoires with Tomestones of Poetics and desynth those as a cheap way to raise your level.

That should finally be just about all you need to know about desynth in FFXIV! How to do it, when to do it, and why: we hope we tackled all the biggest subjects to help you decide what the best way to break down your gear looks like. Best of luck making money and clearing your inventory space!