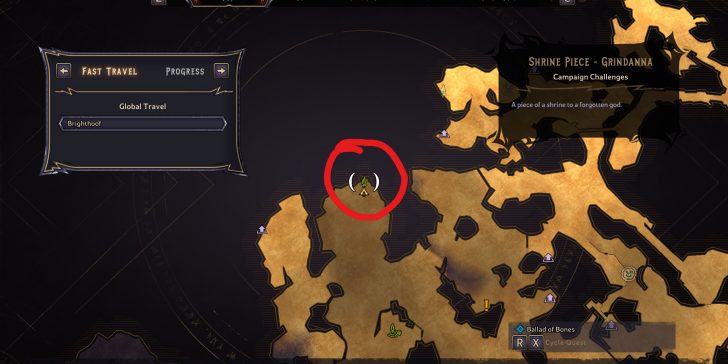 While the core aspects of this looter-shooter franchise remain, Wonderlands differentiates itself in a number of ways. Perhaps the biggest is that there’s a hub world that players can run around in third person. Not only does let you reach specific destinations but partake in a variety of quests tied. One of these is the Shrine of Grindanna, which tasks you with finding four shrine pieces scattered throughout the world.

If you’re looking to complete the Shrine of Grindanna, you can find the first piece in the dungeon directly across from the shrine. Go through the tall grass and enter the glowing blue door. When you get close, Tina will remark that this is a dungeon and there’s a shrine piece inside. This dungeon is broken up across three encounters with two of them revolving around humans and the last involing all types of crab enemies. Once you defeat the boss the shrine piece will spawn by the portal. Make sure to pick it up before you leave!

The second shrine piece is literally right to where the main shrine spawns. From the Shrine of Grindanna look down towards the glowing mineshaft and go up to it. Just like the dungeon above, Tina will state that there’s a shrine piece inside so go into this dungeon. Broken up across two encounters, you won’t need to kill a boss like the previous dungeon. Just slay all the enemies in both rooms until you fill up the progress bar and complete this activity. At the end the shrine piece will spawn by the exit portal.

This piece can be a little tricky to find since it’s actually back towards where this region and Brighthoof connects. Go back to to the city of Brighthoof in the Overworld and head left.

You should see another glowing mine shaft along the left side near one of the bottlecap shortcuts. Approach the dungeon and once again, head inside of this activity.  This dungeon only consists of one encounter and should be exceptionally easy to complete even if you’re underleveled. Make sure to snag that shrine piece before you exit!

Unfortunately, you will need to complete three quests to gain access to the final Grandanna shrine piece. Aproach the seaweed blockade in front of the Wargtooth Shallows and talk to the man outside. He will give you a quest to dissolve the seaweed which is pretty simple and just involves clearing out a dungeon. Once that’s done, go into the Wargtooth Shallows and complete the Ballad of Bones quest. This is a very long quest and will take a fair amount of time to complete. After finishing the quest you will exit to the otherside in the lower portion of the ocean floor.

Follow the path down the hill and approach the woman near the sign. Talk to Margravine to get another quest where you need to locate her glasses to see hidden bridges. Just like the seaweed class, you will have to complete a dungeon and then report back to Margravine to earn this item. Once you have it, you can approach some gaps to see an invisible bridge.

Finally, head all the way back to the dunegon entrance tied to the seaweed quest and follow the path shown above. Across the gap with the lens and then head up the hill. Take the path to the left and at the top you will see another dungeon. Completing this dungeon will award the final Shrine of Grandanna piece. Whew! Now just go back with to the main shrine and interact with it to get your permenant experience boost which is quite handy for those still leveling up!