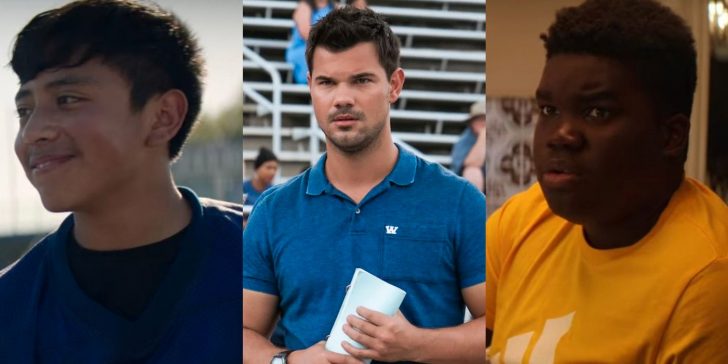 Netflix’s Home Team focuses largely on a team of 12-year-old boys whose lives revolve around football. Most of them wouldn’t likely know their zodiac signs or be all that interested in using them to examine their personalities — unless, of course, they thought it could help them win a game. The most interested character in zodiac signs would probably be Rob Schneider’s Jamie, but the team probably wouldn’t put much stock in them.

Despite that, nearly all of the zodiac signs are represented by the team of Warriors in the movie. The distinct personalities of the different players and the adults in their lives make finding a character to represent each sign a snap.

Brian considers himself to be one of the best characters on the football team, but he doesn’t always get the chance to shine since Marcos and Connor are favored by the other players, and by Sean once he takes over.

Marcos is a little impulsive, and very passionate about his football. Like an Aries, he’s willing to jump into any situation that he feels strongly about, and he does that by announcing to the entire team how great he is more than once. Of course, he’s also a very loyal team player, making it clear that he’ll play any position for the good of the team.

Those born under the sign of Taurus are incredibly resistant to change, which is where their reputation for being stubborn comes from. It just takes them a little longer to adjust to big changes in their life. For Paulie, that means it’s hard to get out of his usual routines when the football team finds themselves with some professional coaching help and positions being shifted.

In fact, despite the increased training, Paulie still orders himself a pizza to show up in the middle of practices and games, knowing exactly the point in the day when he gets hungry again.

Sean’s ex-wife and Conner’s mom, Beth seems to roll with the punches the easiest of all the characters. She’s surprised when her ex shows up in town, but she’s not mad about it, and even makes strides to make sure he can spend time with his son. Her new husband is very different from Sean, but she makes an effort to support his interests as well.

Beth’s ability to adapt and go with the flow is a sure sign of a Gemini. Geminis sometimes have a reputation for being flighty, but that’s not the case; they’re just able to move on and see the new picture faster than most.

Jamie is Beth’s new husband. He doesn’t like what he sees as the violence of football, but he wants to support Conner in an activity he loves, so he still shows up to the games. That supportive nature is very much a Cancer trait.

Jamie’s attempt at making friends with Sean is also a Cancer trait. While Cancers can hold a grudge once they’ve been hurt, they’re also very quick to see the good in people and try to make friends.

Marcos is initially the star player of the team. He’s good at just about everything — and he knows it. That’s partly because his teammates, the adults in the stand, and his father are all quick to point out how great he is. Marcos soaks up the attention like a true Leo.

Marcos clearly loves to be the center of attention, but when he is changed from quarterback to a new position, he decides that he’s not as mad about it as his dad. That’s because he’s also loyal to the team and willing to share the spotlight with his friends. He just wants to help them win.

Sean’s ambition and his drive might make him seem like a Capricorn. His willingness to do anything to get what he wants might even make zodiac enthusiasts think he’s a Scorpio. But Sean is actually a better fit for a Virgo.

Sean is absolutely a methodical planner. He can’t help himself when he sees a play forming in his mind that can help his son’s team do better. Yes, he wants to make himself look good to the football fans, but this is also the only way he knows to show his son he cares, obsessing about the one thing the two of them have in common.

Troy is the well-meaning coach of the team who takes a backseat when Sean comes into the picture, even though he is a natural leader. He’s got the respect of the kids, and though his assistant coach doesn’t, Troy is a natural partner. He’s also happy to slip into the role of supporting player with Sean, which is a very Libra thing to do.

Libras are also charmers, which is why Troy is able to get along so well with the kids and the parents. He’s also got that Libra sense of fair play, wanting to make sure that everyone on the team has a chance to play and have fun, even if the team doesn’t win.

Cindy is one of the mothers of the players on the young team. She knows what she wants, and she goes after it. What she really wants is a date with someone who’s invested in both her and her son, and she thinks she’s going to get that with Sean, but that’s not the case.

Cindy has that Scorpio sense of purpose. Though Scorpios aren’t always willing to show their emotions to new people, they go after what they want with passion, and sometimes aggression. They don’t give up.

Home Team’s assistant coach is a little all over the place. He clearly likes football and wants to be there for the kids, but his blunt way of speaking tends to put the kids off, as do some of his stories.

Mitch’s honest approach to life, even if it seems messy to outsiders, is much like a Sagittarius. The sign is known for having a sense of adventure and being honest to a fault.

Connor might not seem like the typical Capricorn at first as Capricorns are known for being very ambitious and very family-oriented. Initially, Connor seems like he’s just along for the ride on his team and he wants nothing to do with the dad who moved away to coach a pro football team.

However, Connor does want the best for his team, and he works incredibly hard to make it happen, as a Capricorn would. Even when he and Marcos are playing as both offense and defense in the championship game, Conner keeps going because he initially thinks it’s for the good of the team.

Harlan is someone who marches to the beat of his own drum. Despite being a part of the team, he’s clearly still trying to find his own way. While most of his teammates are more invested in the team than anything else, Harlan has a crush and an interest in music.

Aquarius is the most unique of signs. The rebel or the outsider, they find their own way in the world, wanting to do things on their own terms, much like Harlan trying to deal with his crush and the pressure of the game on his own.

Dennis is a gentle soul who doesn’t really want to tackle people in the game. He gets in his own head a little bit while playing, and that’s certainly something the daydreaming Pisces can understand.

Pisces are often seen as the most in touch with their emotions of the signs, but they also tend to be the most observant as well. Just as Dennis has the foresight to warn Sean about his mom’s plan to get him to date her, a Pisces would be able to see the connections forming between people more readily than most.

NEXT: Which Mighty Ducks Character Are You Based On Your Zodiac Sign?

Amanda is a freelance writer in Florida. She holds a Psychology degree and loves superheroes and serial storytelling. Her favorite heroines include Black Widow, Blake Belladonna, and Sailor Jupiter.