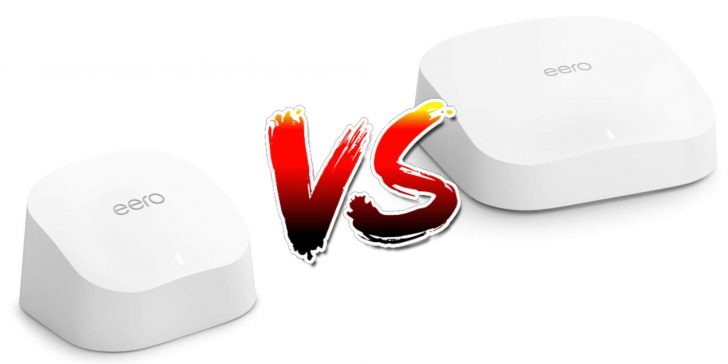 The Amazon-owned Eero brand makes some of the best mesh routers on the market, but between the Eero 6 and Eero Pro 6, which one is worth buying? To be honest, routers aren’t the most exciting thing to talk about. They usually have confusing names, bland designs, and can be complicated to set up. Despite all of that, routers are absolutely necessary to have a functioning home Wi-Fi network.

That’s why Eero has been such a welcome presence in the router niche. Founded in 2014 and then purchased by Amazon in 2019, Eero’s routers stand out for bucking the trends of more traditional routers. They’re marketed well, look quite good, and are designed to be as easy to use as possible. Today, two of Eero’s most popular routers are the Eero 6 and Eero Pro 6. Both stand out for their respective reasons, but which is ultimately the better overall buy? Let’s take a closer look and find out.

Related: How To Share Wi-Fi Passwords On An iPhone

Starting with the hardware, the Eero 6 and Eero Pro 6 look very similar. Both are white boxes with a nice rounded top, though the Pro 6 is a bit larger all around with dimensions of 5.3 x 5.3 x 2.1 inches. By comparison, the Eero 6 measures just 3.91 x 3.82 x 2.42 inches. The more compact nature of the Eero 6 means it’s easier to fit in tight spaces, but ultimately, both routers are small enough that placement shouldn’t be an issue. Both routers also have two ethernet ports on the back, which is fine for most people but may leave power users wanting more.

The primary difference between the Eero 6 and Eero Pro 6 is performance. While each one is a Wi-Fi 6 router with the 802.11ax standard, the Pro 6 is more capable thanks to faster speeds and enhanced coverage. To its credit, the regular Eero 6 is no slouch. It has a dual-band design, can handle speeds up to 900Mbps, and delivers up to 1500 sq ft of coverage with a single unit. The Eero Pro 6 is better in every way — delivering a tri-band design, speeds up to 1Gbps, and up to 2,000 sq ft of coverage.

Here’s what all of this boils down to. If someone lives in a smaller house/apartment and doesn’t have gigabit internet, the Eero 6 has plenty of power to keep them happy. Where the Eero Pro 6 really shines is when setting up multiple units throughout a larger home. Since it has two 5Ghz bands instead of one, it’s able to reliably deliver ultra-fast Wi-Fi speeds while still communicating with the rest of the mesh network (something the regular Eero 6 can struggle with).

Outside of the speed/coverage differences, the Eero 6 and Eero Pro 6 deliver a pretty identical experience. Both routers are set up and managed with the Eero companion app, allowing users to check their network status, see connected devices, set up parental controls, and more. Eero routers also work seamlessly with Alexa, Google Assistant, and Apple HomeKit — ensuring seamless integration regardless of which smart home platform someone uses. Additionally, both the Eero 6 and Eero Pro 6 double as Zigbee smart home hubs. If someone has other Zigbee devices in their home (such as compatible smart bulbs, switches, etc.), the Eero can act as the single hub for all of them.

In March 2022, Eero expanded its router lineup with the Eero 6+ and Eero Pro 6E. The Eero 6+ is marketed as Eero’s ‘most affordable gigabit system’ and is essentially a souped-up version of the regular Eero 6. The Eero 6+ has two 1Gb Ethernet ports on every device (instead of just the router), supports faster 1Gbps speeds, and has a newer 160MHz channel for improved device bandwidth.

The Eero 6 & Eero Pro 6 Are Great For Different People

At the end of the day, deciding which Eero to buy depends on the performance someone needs out of their Wi-Fi network. Live in a smaller place and don’t have gigabit internet? The standard Eero 6 is a great choice for the money. A single router can be purchased for $89, and a three-pack is available for just $249. If someone has extra square footage and money in their wallet, upgrading to the Eero Pro 6 is a smart move. The tri-band design is excellent for preventing network congestion, it more easily covers larger homes, and it’s ready to handle gigabit connections with ease. The higher price can be tough to swallow ($229 for a single router, $599 for a three-pack), but for anyone who thinks they need the extra horsepower, it’ll be well worth it in the long run.