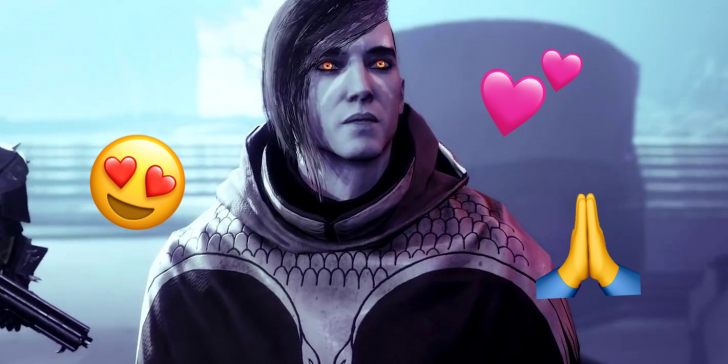 Destiny is a franchise with a lot of characters who don’t always get as much on-screen development as we might like. Sure, you get lore drops about what people are up to when they’re not blasting aliens or blowing each other up in the Crucible, but that isn’t always enough. Sometimes, you just have to write fanfiction exploring the inner lives of your favorite Guardians. But who are Destiny fanfiction authors writing about? To answer this question, I used the fanfiction site Archive of Our Own.

There are 7003 works under the Destiny fandom on AO3. Here’s the breakdown of the top ten character pairings within them:

Surprised? Probably not at the number one spot — Osiris and Saint-14 have been a fan-favorite canonical couple ever since it was first suggested, then later actually shown that they were romantically involved. They’re a classic pairing of a gregarious, prideful warrior and a more reserved, thoughtful wizard-type guy. And now that Osiris is in a coma after his experiences with Savathun last year, there’s some serious hurt/comfort potential in the mix too.

So, we all saw that one coming. But there are a few surprise appearances in the list, as well as — to me at least — some unexpected absences.

First, it’s worth noting that of the 7000-odd works based on Destiny, only a small percentage are actually about romantic pairings. The most popular pairing is only featured in 244 works, implying that there’s a lot of Destiny fic that isn’t really about romantic relationships at all. For context, 2345 of the total works are rated Teen and Up, and only 991 are rated Explicit.

The continued appearance of Cayde-6 in the top 10 pairings is odd to me. He’s been dead for years, and I’ve all but forgotten about him. But then, as someone who only got into the game in Forsaken, I never really had much occasion to connect to the character. He’ll always be the quippy Nathan Fillion robot to me, but maybe longer-term players have fonder memories of the fallen Hunter Vanguard. The fact that he’s paired with both male and female Guardians makes total sense, though — dude definitely seemed like him was down for whatever.

Speaking of characters who are down for dirty deeds, The Drifter is the only other Destiny character to appear in more than one pairing in the top 10. Drifter/Female Guardian intuitively makes sense — he has the exact kind of scumbag energy that makes a fictional guy attractive to a lot of women. Drifter/Shin Malphur is a little more surprising, given that the latter character has never actually appeared onscreen in Destiny. But in terms of pairings with lots of angst, secrets, lies, and hurt, he and Drifter are probably the most fruitful one in the series, so it’s easy for me to understand the appeal.

Probably the biggest breakout hit on the list is Crow/Guardian, given that the character has only been around since Season of the Hunt. Why is Crow so popular among fic writers? He’s a soft little outcast who people want to take care of. That’s literally it. Protect him. Plus, he’s gotten the most development out of any Destiny character in the last couple of years to the point that he’s arguably become the main character of Destiny 2.

Some characters I would have expected to see in the top 10 but that aren’t present include Amanda Holliday, Mara Sov, and Ana Bray. There are some stories featuring these popular figures, but not as many as you might expect. That could be in part because Destiny fic featuring relationships is mostly M/M (1773 works) and F/M (1714) pairings, where the latter mainly seem to be original female Guardians paired with existing male characters. Generally speaking, a lot of M/M fic tends to be written by women for various reasons, including the space it affords female writers to imagine a romantic relationship unburdened by the power dynamics of gender. There are men writing fanfiction, of course, but a cursory look at some websites you can look into on your own time suggests that guys who are horny for Destiny’s female characters are simply drawing art of them. Apropos of nothing, putting huge boobs on a Vex Goblin is a masturbatory coward’s move.

What’s your favorite Destiny 2 ship? Are you a Saint-14/Osiris stalwart? Do you want to see Crow and your Guardian end up together? Let me know in the comments.