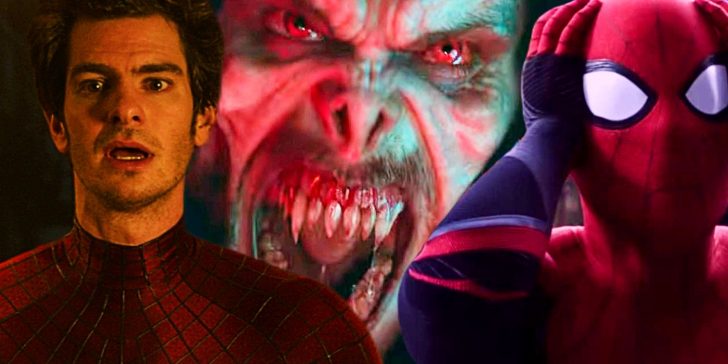 It has officially been confirmed that Spider-Man exists within the same universe as Sony’s upcoming Morbius film–but which one exactly? The newest entry in the Sony Spider-Man Universe, Morbius continues Venom’s tradition of solo films in which a famous Spider-Man villain gets a chance to shine. As with its predecessor, Morbius will see an originally villainous character recreated with a few redeemable qualities and, presumably, persuing the path of an anti-hero.

In the months leading up to the release of Morbius, the question of which cinematic “universe” the film would be set in largely dominated fan discussion. While it was long assumed to be a part of the same shared universe as Venom, official promotional material for the film only complicated things. The official Morbius trailer referenced Venom, featured a surprise cameo from Michael Keaton’s Vulture, and graffiti of Sam Raimi’s Spider-Man was spotted on the wall.

While there are still plenty of questions to be answered about the Morbius universe, some are finally becoming more clear thanks to the upcoming arrival of the film in theaters, as well as all the accompanying press from the film’s director, producers, and actors. In addition to clearing up the movie itself, these answers can also lead to a better understanding of what the Sony Spider-Man Universe has planned. With Kraven The Hunter currently shooting and a Madame Web movie announced, Sony’s own Spider-Verse is finally becoming a reality (again).

Sony’s Spider-Verse Spider-Man Has Been Confirmed

Morbius director Daniel Espinosa stated during an interview with CinemaBlend (via Twitter) that “Morbius lives in the same universe as Venom”. When asked if there is a Spider-Man in the Venom and Morbius universe, Espinosa was succinct, simply stating, “Of course”. Espinosa further stated that, as far as he understand, audiences will soon discover which Spider-Man that is.

The answer may not have been too clear, but it does at least confirm that there is a Spider-Man in the Morbius and Venom universe. The problem is, considering that the last adventure for the wall-crawler, Spider-Man: No Way Home, saw three different Peter Parkers meet in the multiverse, it becomes difficult to guess exactly which version of the character Espinosa is talking about—or where he’s been during the events of both Venom films.

Why The MCU Peter Parker Can’t Be Sony’s Version

There are several reasons, both in-universe and contractual, that would make it difficult for MCU Peter to be a part of the Sony Spider-Man Universe. When it comes to movie rights, Spider-Man is technically a Sony character, and presumably, every previously live-action Spider-Man (or even a new one) is a possibility. That said, Tom Holland’s Spider-Man is a joint production between Sony and Marvel, and all of his films went through the same creative process as any other MCU production. Films like Venom and Morbius, on the other hand, are entirely Sony productions and don’t involve the likes of Kevin Feige. For that reason, a complete synergy between these two franchises would be difficult to achieve.

Having MCU Peter Parker as the Spider-Man in this new universe that Sony is creating would also be a challenge in terms of storytelling. Morbius and Venom are not set in the same universe as the MCU, considering the post-credits scenes from Venom: Let There Be Carnage and Spider-Man: No Way Home, and the only way for MCU Peter to interact with these villains would be through the Multiverse. While a Tom Holland cameo or appearance isn’t out of the question now or in the future, his version of Spider-Man was created in the Marvel Cinematic Universe and could only really be a visitor to the Sony Spider-Man Universe, not its primary Spider-Man.

Sony Should Use Miles Morales In The Spider-Verse

The Spider-Man universe that Sony is creating could be the perfect opportunity to introduce Miles Morales. To avoid having more than one Peter Parker existing in different franchises at the same time and still have a Spider-Man interacting with characters like Venom and Morbius, it would make a lot of sense to bring in Miles Morales as the main Spider-Man in Sony’s franchise. Miles’ live-action debut is only a matter of time given how popular the character has been since his comics debut in the Ultimate universe, in addition to Marvel’s Playstation exclusive video games.

Considering that Tom Holland’s Peter is still a young hero who’s only now discovered what it means to be Spider-Man, it wouldn’t make much sense to have him train Miles Morales in the MCU just yet. An alternative would be to wait for Peter to get older and more experienced—or to use an already aging Peter like Tobey Maguire’s version of Spider-Man as his mentor.

Andrew Garfield’s Spider-Man Should Be In Morbius’ Universe

Andrew Garfield’s version of Spider-Man is also a possibility for Morbius and Sony’s universe. After a performance lauded by critics and fans alike in Spider-Man: No Way Home, Garfield has won fans’ favor and left many wanting to see more of his character. His run as Spider-Man was abruptly interrupted after The Amazing Spider-Man 2, followed by an agreement between Marvel and Sony that resulted in a reboot of Spider-Man for the MCU. The multiverse brought some closure for Garfield’s Spider-Man, namely him being able to save MJ in a way that mirrored Gwen Stacy’s death in his universe. Even still, many believe that there is still more to his story and that the actor should be allowed to play the character again after the troubling cancellation of Sony’s franchise.

Andrew Garfield returning as Peter Parker in Sony’s Spider-Man Universe would be a far more achievable goal than restarting a franchise that was canceled in 2015. Tom Holland is the current Spider-Man, and the already established MCU hero will most likely get another series of movies following the conclusion of his first trilogy. It is highly unlikely that a second Spider-Man solo franchise will run at the same time as Holland’s, meaning that Sony’s pocket Spider-Man universe is the next best thing for Garfield’s Spider-Man.

This would make even more sense considering Sony’s original plans before the deal with Marvel was to have a Sinister Six movie as part of The Amazing Spider-Man franchise. Nearly a decade later, the idea that Andrew Garfield’s Spidey would eventually face off against a version of the Sinister Six may come true. The endgame of Sony’s Spider-Man Universe remains to be seen, but the confirmed existence of a Spider-Man in the Morbius and Venom universe makes it more exciting. With a cinematic legacy spanning 20 years, possibilities abound for the franchise. Whether it’s Tom Holland, Andrew Garfield, or a completely new Spider-Man such as Miles Morales, the character will remain busy for years to come.

Next: How The MCU Would Be Irreversibly Different If Garfield Was Spider-Man

Marcelo Leite is a senior writer for Screen Rant with years of experience in creative and academic writing. Although his chosen field was structure engineering, there is nothing he likes better than writing about the things he loves.