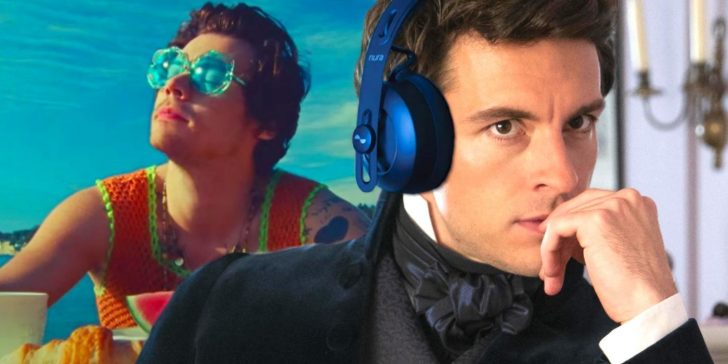 Bridgerton might be a period drama, but it includes covers of songs by Ariana Grande, Billie Eilish and Taylor Swift for a very clever reason.

Netflix’s Bridgerton combines the tropes and aesthetic of the likes of Pride & Prejudice, but with a more modern edge provided by Shondaland, including several covers of recent pop songs and one modern track. But why does the series include Regency versions of songs by Billie Eilish, Harry Styles, Taylor Swift and Maroon 5 among others? It’s all about Bridgerton’s progressive ideas.

Alongside an exceptional, emotive score by Kris Bowers, the first season of Bridgerton included covers of Ariana Grande’s “thank u, next”, Maroon 5’s “Girls Like You”, Shawn Mendes’ “In My Blood”, Billie Eilish’s “bad guy”, Celeste’s “Strange”, and Taylor Swift’s pop song “Wildest Dreams”, most of which are covered by Vitamin String Quartet with the last two by Bowers and Duomo. They are immaculately-observed period-appropriate covers and they add a great hook to distinguish it from other period competitors. There’s also a track – “Love Yourself” – by Sufjan Stevens that completely drops the historical relevance for one key moment. And Bridgerton season 2’s soundtrack also packs in some covers of pop floor-fillers.

Typically, you might expect a show like this to use the gimmick of modern covers all the way through, or to stick with a more traditional score, so why did Bridgerton choose to go with both? The covers actually operate as an easy indicator that the show is not traditionalist. Just like its consciously diverse cast, the point of Netflix’s Bridgerton is that it stands as a challenge to the usual tropes of this type of show – it is feminist, progressive, defiant even, and using modern music in the regency style is a smart nod to that.

While it does reinforce some Regency drama tropes, particularly in its romantic storylines, Bridgerton is based on a matriarchal system with Queen Charlotte on the throne thanks to the illness of her husband King George III. Each of the most powerful figures in and around the ton are female: the Queen, Lady Danbury (who even the Queen takes orders from at one point), and Lady Whistledown are the true power players, while key male characters tend to be presented as more emotional and, even, more hysterical at times. This inversion underpins the whole show and so too does the diversity of characters. At one point, that racial diversity is addressed overtly when it is revealed that Black characters were afforded their positions of privilege in this Regency society thanks to the king falling in love with Queen Charlotte.

Every Modern Covered In Bridgerton Season 2

There’s an exciting list of modern artists set to premiere on the Bridgerton season 2 soundtrack, ready to score the upcoming romance of Anthony Bridgerton and Kate Sharma. Bollywood fans will recognize “Kabhi Khushi Kabhie Gham” by Lata Mangeshkar, the title track from the film of the same name. And on top of that, there are a number of recognizable pop songs covered in Bridgerton season 2:

“Material Girl” by Madonna”Diamonds” by Rihanna”Stay Away” by Nirvana”Sign of the Times” by Harry Styles”You Oughta Know” by Alanis Morrisette”Dancing on My Own” by Robyn”What About Us” by P!nk”How Deep Is Your Love” by Calvin Harris and the Disciples”Wrecking Ball” by Miley Cyrus

The musical choices are a reminder each time that the audience is watching a Regency story with modern sentiments behind it. Shonda Rhimes’ production seeks to be more challenging than you’d typically expect with a strong feminist element at times. Ultimately, it does end up deferring to generic type, but the flashes of modernity – particularly in the Sufjan Stevens song that stands out massively – are there as Bridgerton’s hook to the present and almost as a rebellion against expectations of the era it covers.

Next: Bridgerton Cast & Character Guide: What Else The Actors Have Been In