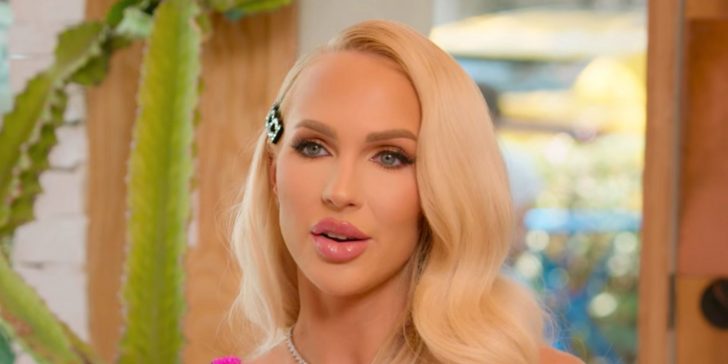 Selling Sunset’s Christine Quinn opted out of the show’s reunion, citing a case of COVID-19. However, some people don’t believe that she was ill.

After Christine Quinn skipped the first-ever Selling Sunset reunion due to her Covid-19 diagnosis, some cast members are calling her bluff. Christine ended Season 5 on a cliffhanger, with her status at The Oppenheim Group up for debate. After offending almost everyone in the office, Christine ended up not facing her feuds head-on, due to a possibly fake case of Covid-19. Mary Fitzgerald and Chrishell Stause aren’t afraid to call out Christine on the lies that they think she is telling.

Newcomer Chelsea Lazkani was Christine’s only friend in Season 5. After upsetting Amanza Smith and Davina Potratz, Christine lost her last two friends in the office. Many took issue with Selling Sunset’s Christine’s shady remarks about everyone, as well as her unbothered approach to taking accountability. Things really came to a head at season’s end, when Emma Hernan revealed an alleged bribe that Christine made to a mutual client that she wanted to steal from her. Once Emma revealed the claims, Jason and Brett Oppenheim attempted to get in contact with Christine for a meeting. When she chose not to show, the season ended with fans wondering if Christine is still with the agency.

Fans were anticipating Christine being confronted at the reunion. However, a positive Covid-19 diagnosis gave Christine the perfect excuse to skip the event. Mary recently called out Christine, explaining that she thinks Christine made up the Covid-19 diagnosis in order to avoid getting grilled by her co-stars. “Because we all tested on Tuesday and then again on Friday,” Mary told TMZ. Mary says Christine’s test came back negative both times, so she was in the clear to attend the reunion. When asked why she thinks Christine missed the reunion, Mary believes it’s “probably because she didn’t want to face everything she’s done.”

Mary says it was awkward having to talk about Christine’s behavior on the show since she wasn’t in attendance. “We didn’t want to have to talk to her about her actions, and I’m sure she didn’t want to have answers for her actions,” Mary remarked. Chrishell was the first to call out Christine’s Covid-19 claims by responding to a tweet of an article showing Christine posing for photos with The Real Housewives of New Jersey star, Melissa Gorga. The picture was taken on the same day that Christine claimed to test positive. “The lie detector test determined that was a lie,” the Maury Povich gif Chrishell posted said. It was a subtle and shady response to Christine’s Covid-19 claims.

Had she shown up, Christine was sure to be put in the hot seat. The Selling Sunset star rubbed everyone the wrong way over the course of the show’s five seasons. She is known for speaking her mind and sharing her shady jokes, even if no one finds them funny. Heather Rae Young attempted to make peace with Christine, to no avail. Heather was looking forward to confronting Christine at the reunion. However, Christine didn’t give her (or anyone else) the pleasure. Recently, news surfaced that Christine is no longer a realtor at The Oppenheim Group.