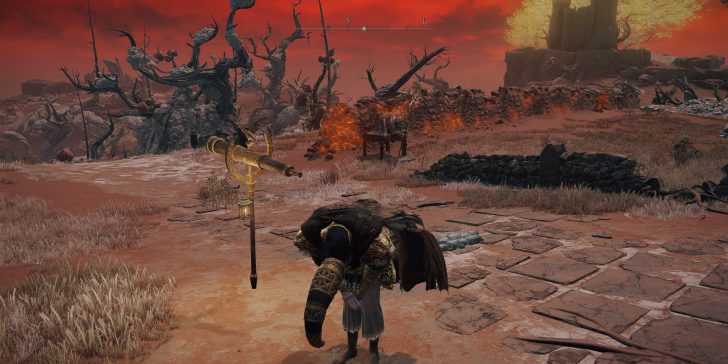 I get motion sickness, ok? I’ve tried everything — ginger, Dramamine, looking at a point in the distance, those ridiculous-looking glasses that are supposed to trick your brain into being ok with being seated in a moving vehicle. Nothing reliably works, and it can turn routine car trips into nausea-inducing ordeals. One thing that never seems to trigger my motion sickness, though, is video games. So why is it that looking through one of Elden Ring‘s Birdseye Telescopes for even a few seconds makes me want to hurl?

Other players have apparently had motion sickness issues with Elden Ring generally, but I haven’t run into any problems except when looking through one of the aforementioned scopes. Maybe it’s because I’ve turn motion blur off and depth of field down, but running around the Lands Between hasn’t caused me any issues. Something about the first-person perspective from the telescope, though, immediately made me — and a lot of my Twitch viewers — queasy. Thankfully, the telescopes aren’t an integral part of the game, simply allowing players to scout out the area. But still, why does this particular experience made me so sick to my stomach?

I’m guessing it has something to do with the field of view, which seems a little different while looking through the telescope. Field of view is the extent of the world that you can see around you. Humans have a FOV of slightly over 210 degrees in front of us. However, video games are typically played with the screen at a distance — further for consoles, and closer for PC games. That means the in-game field of view has to be adjusted appropriately to match what your brain expects to be able to see. PC games typically use a higher FOV because the screen occupies more of your range of vision.

According to Game Accessibility Guidelines, a FOV different enough from what the brain expects can cause motion sickness. Too low — as with PC ports of console games which don’t adjust things — and it feels as if you’re looking through binoculars. Too high, and you get a kind of fisheye effect that can be disorienting in its own right. If you’ve ever felt motion sickness when playing a game, it’s worth messing around with the FOV settings and in particular jacking them up a little bit, if your computer or console can handle it.

As for me, I’m just going to stay away from those telescopes — something about the elevated perspective and maybe some kind of forced adjustment to the field of view while you’re looking through them just makes me want to yartz. It’s not like there isn’t enough other stuff in Elden Ring to make me queasy. Looking at you, Caelid. Not that I want to.