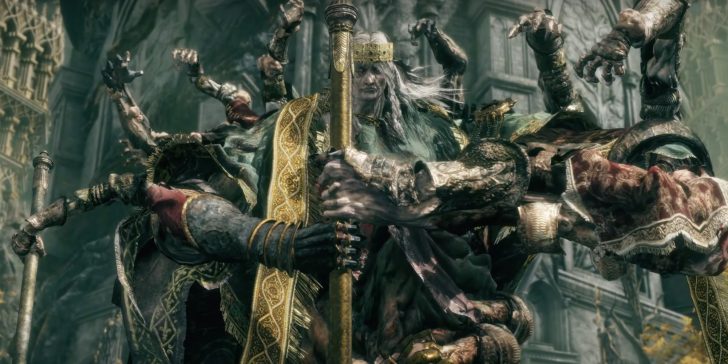 Godrick has grafted limbs onto himself, seemingly a grotesque bid at living up to his ancestors and being worthy of inheriting an Elden Ring shard.

The first demigod most players will encounter in Elden Ring is Godrick the Grafted, Lord of Stormveil Castle and a horrifying coalescence of limbs taken from the Tarnished that have challenged him before. Repulsive terrors aren’t necessarily a new phenomenon to FromSoftware games, but Godrick is a special kind of grotesque. He has seemingly been harvesting and grafting limbs onto himself as a means to grow more powerful, and potentially compensate for inadequacies he has in comparison to his venerated ancestors.

The player character is not the first Tarnished to come to the Lands Between in an attempt to become Elden Lord. Many others can be met throughout the game, and they convene in Roundtable Hold, Elden Ring’s Firelink Shrine-style hub area. Godrick is one of six targets for the Tarnished hoping to command the power of the Elden Ring. The Lord of Stomveil Castle holds a Great Rune, a shard of the Elden Ring, and uses its power to command his legions.

Godrick is descended from Godfrey, the first Elden Lord of the Lands Between. Godfrey was married to Queen Marika the Eternal, and the two of them together gave rise to the golden lineage, a revered family. Godrick now seems to embody how far the golden lineage has fallen, though, and is not thought highly of by many in the Lands Between. Gideon Ofnir, who will give the player some background information on the six demigods in Roundtable Hold, will tell the player, “Godrick the Grafted, Lord of Stormveil. Despite being the blood of Godfrey, first Elden Lord, he’s a grotesque old fool, grasping for power.” The once-great golden lineage has likely decayed ever since Elden Ring’s Godfrey was exiled and became Tarnished.

Godrick proclaims himself the lord of all that is golden, but he lacks the alleged grandeur of his ancestors. Grafting harvested limbs onto himself is likely a way for him to compensate for his shortcoming when compared to legendary figures like Godfrey. The theory is supported by his dialogue when defeating the player in battle: “Lowly Tarnished… Thou’rt unfit even to graft…” It would seem that Godrick only adds the limbs of his most worthy foes to his repertoire. When the player manages to reduce his health by half, the demigod grows desperate and grafts a dragon’s head onto himself. This is one instance where Elden Ring embraces Bloodborne’s body horror, and is similar to Master Willem of Byrgenwerth College grafting eyes onto people so they can gain Insight and evolve into something closer to the Great Ones.

Godrick has a reverence for his ancestors, and wants to prove himself a worthy inheritor of the Elden Ring shard, and thus physically enhances himself and certain underlings, like the Grafted Scion players fight in Stormveil Castle. The term “graft” is most commonly used in medicine and horticulture, but it can also mean to gain wealth or other material through deception. This propagates the idea that Godrick has only risen to power through inheritance, and is not an effective governor in his own right, an insecurity that has led one of Elden Ring’s demigods to steal the limbs and powers of others.

Next: Elden Ring’s Co-Op Is The Best Way To Level Up