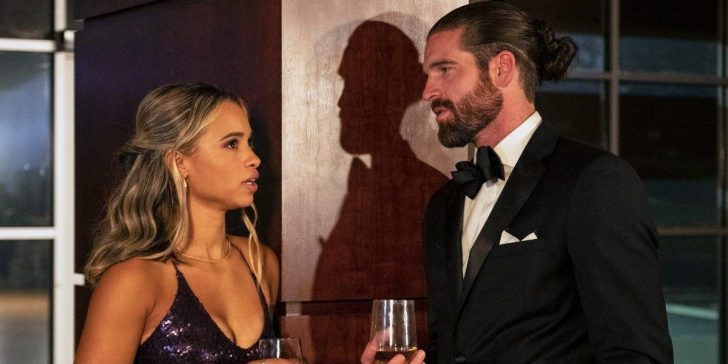 Joe Millionaire’s Kurt Sowers chose Amanda Pace over Carolyn Moore. Here’s why that might have been a mistake and why he should’ve trusted his heart.

The season finale of Joe Millionaire: For Richer For Poorer delivered two major twists, the most shocking arguably being that Kurt Sowers rejected the object of his instant-attraction, Carolyn Moore, in favor of his familiar connection with Amanda Pace. Carolyn became the woman many fans loved to hate as the season went on, due to her overly-confident attitude and jealous behavior. Yet it was obvious from the first episode Kurt was crazy about her. His tearful goodbye to her made for a great reality TV finale, but was it the right decision for him?

Unlike fellow housemate and bachelor Steven McBee, whose surprise romance with Calah Jackson is going strong, Kurt and Amanda reportedly split only a few months after the taping of the finale. Amanda has made claims that Kurt was not emotionally available. While it appears the breakup was mutual and amicable, Amanda does not see any chance of a reconciliation in their future. While hindsight is always 20/20, it seems the average-Joe Millionaire should have followed his heart.

There is no denying the connection that developed between Kurt and Amanda as the show progressed. Rarely were the pair not laughing in each other’s company. They were clearly in sync on many levels. And their use of the code word “avocado” was adorable. But none of it compared to the look that washed over the man-bun sporting bachelor every time Carolyn walked into the room. He would simply melt. The moment he was introduced to all 18 women, Carolyn may as well have been the only one there. There has been much speculation about editing of the show, manipulating scenarios to appear as if contestants intentions were something other than what they were. But there was no editing the way Kurt looked at Carolyn.

Kurt’s relationship with fashion designer Amanda Pace, while fun and playful, never got past the surface. Kurt knew money wasn’t important to her because she had plenty of her own, but that was about as far as they ever delved into in terms of how a future after the show would work. As much as Kurt confessed in solo interviews that Carolyn was dismissive of his concerns regarding her son and shared custody with his ex-husband, the two discussed the topic multiple times. Carolyn made it clear she saw Kurt being a part of her son’s life. She may not have had a definitive plan for how their lives would eventually merge into one but she was very clear that she was willing to do whatever it took to make a future with him work.

In the moments leading up to the final decision, the Charlotte-based contractor revealed in a confessional interview: “My head is telling me Amanda. My heart is telling me Carolyn.” Moments before he made a commitment to a relationship with Amanda, he admitted that his heart was with Carolyn. Amanda may have been the right choice for all the right reasons. His family may have liked her. They may have had many things common. Their relationship may have been more mature and more sensible. But the heart wants what the heart wants. And Kurt’s heart wanted Carolyn, right up to the end.

It is disappointing to hear that Kurt and Amanda did not find their happily ever after on Joe Millionaire: For Richer For Poorer. While the surprise choice created quite the buzz on social media, it should have come as no surprise that the relationship did not last. Amanda is a beautiful woman with a lot to offer. But Kurt’s heart had already been taken.

Emily Steele completed her Bachelor of Arts degree in secondary English education at Niagara University before receiving her Masters of Arts degree with a concentration in communications from SUNY Buffalo. She resides in Nashville, TN with her husband, two children, and a commune of failed foster pets.

When she’s not writing for Screen Rant, you can find her on the set of Chrisley Knows Best and Growing Up Chrisley, where she works as the on-set teacher. Follow her on Instagram at @therealsteele19 or Twitter at @TheEmilySteele or check out more samples of her work at emilysteele.com.