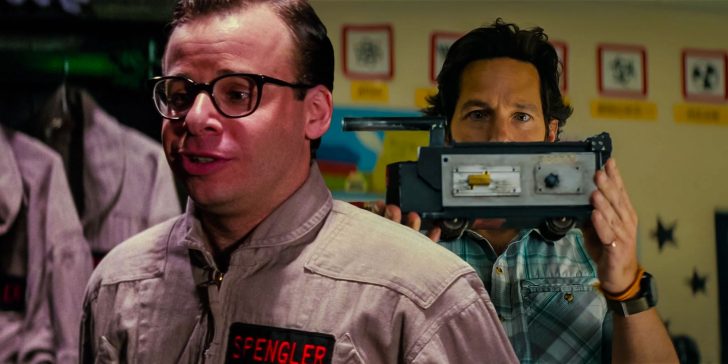 Ghostbusters: Afterlife had many surprises for fans of the original Ghostbusters movie, but a cameo from Rick Moranis’s Louis Tully wasn’t one of them

Belated sequel Ghostbusters: Afterlife has many references to, and cameos from, the original Ghostbusters movie, but Rick Moranis’s Louis Tully sadly didn’t return. In 1984’s Ghostbusters, Rick Moranis played a nerdy accountant who is possessed by a Terror Dog, becoming the “Keymaster.” Together with Sigourney Weaver’s Dana Barrett (also possessed), they seek to bring forth Gozer the Destroyer. Moranis reprised his role for Ghostbusters 2, attempting to become the fifth Ghostbuster and aid them in defeating Vigo the Carpathian.

Rick Moranis was part of some of the most iconic movies of the 1980s. In addition to the Ghostbusters franchise, he also starred in the cult classic musical Little Shop of Horrors, Star Wars parody Spaceballs, and Disney’s sci-fi comedy Honey, I Shrunk the Kids. Since his 1980s heyday, however, Rick Moranis slowed down his film work significantly in the 1990s to prioritize raising his kids as a single father. By contrast, some of Moranis’s Ghostbusters co-stars like Bill Murray and Sigourney Weaver have continued to feature prominently in Hollywood since their 80s prime.

While it was originally speculated that Rick Moranis would join his fellow castmates from the original Ghostbusters and return for Ghostbusters: Afterlife, he actually didn’t appear in a cameo role. Despite his extended absence from cinema screens, Rick Moranis hasn’t retired from acting completely but now focuses more on voice acting and writing. He’s also notoriously picky about the roles he takes and was apparently disappointed in Ghostbusters 2. It’s also not the first time that Rick Moranis has turned down the chance to reprise his role as Louis Tully by returning to the original Ghostbusters movie team. Moranis passed on lending his voice and likeness to the 2009 release of Ghostbusters: The Video Game, and also decided not to cameo in Paul Feig’s 2016 reboot Ghostbusters, saying that it didn’t make sense to him to “do just one day of shooting on something I did 30 years ago.” (via The Hollywood Reporter). Given this history of disinterest in returning for Ghostbusters projects, it’s not too surprising that Rick Moranis didn’t cameo in Ghostbusters: Afterlife.

What Happened To Louis Tully After Ghostbusters

Notwithstanding this, Rick Moranis has returned to his famous roles when he feels it works. He voiced Spaceball’s Dark Helmet in an episode of The Goldbergs, and will be back on theater screens for the first time in years for the upcoming legacy sequel, Shrunk, resurrecting the Honey, I Shrunk the Kids franchise. The end credits scene in Ghostbusters: Afterlife sets up another potential sequel back in New York. If there is more for Louis Tully to do in a future Ghostbusters movie, then Rick Moranis may then reconsider returning to the role.

Andrew is a Movies/TV Features writer for Screen Rant who has loved and studied movies since the heyday of video rentals and recording films off the telly. Following a BSc in Geography and Masters degree in Planning Andrew decided that writing about movies and TV shows was where his true passion lies. Residing in England with his wife and two daughters, when he’s not watching movies he enjoys illustrating and creative writing.