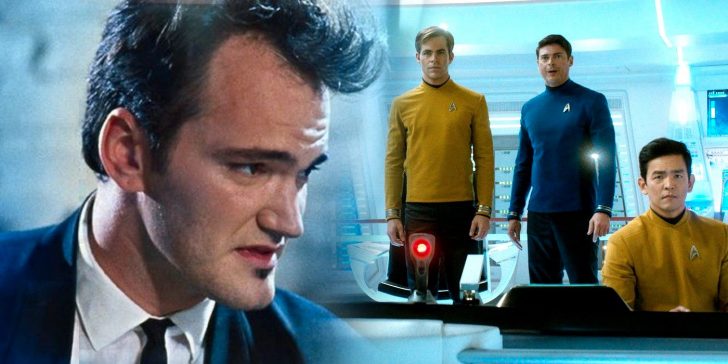 Star Trek 4 has endured a difficult creation through several directors, but why is the sequel happening instead of Quentin Tarantino’s proposed movie?

Why is Paramount pushing ahead with Star Trek 4, while Quentin Tarantino’s proposed Star Trek movie dances with the devil in development hell? J.J. Abrams’ Star Trek movie series couldn’t have wished for a better start in 2009, but after a divisive sequel in Star Trek Into Darkness, then a box office bomb with Star Trek Beyond, Paramount found itself carefully considering the franchise’s future. That might explain why Star Trek 4’s production has become a drama in and of itself. The next adventure for Chris Pine’s crew has changed hands repeatedly – from S.J. Clarkson, to Noah Hawley, to Matt Shakman – and was at one point considering a return for Chris Hemsworth’s George Kirk.

That’s not even the weirdest part. In late 2017, the Star Trek universe was rocked by news of a Quentin Tarantino Star Trek movie in development. The R-rated script would’ve reunited the Kelvin timeline crew (effectively making it Star Trek 4), and has been described as Pulp Fiction in space with a gangster movie vibe. By the end of 2019, momentum on Tarantino’s Star Trek had stalled, and come mid-2020, the project was dead, Jim. Paramount has now confirmed Star Trek 4 is happening, directed by Matt Shakman, and featuring the cast of Chris Pine, Zachary Quinto, Zoe Saldana, etc. Given how much excitement the prospect of Tarantino at the Enterprise’s helm generated, why is Paramount forging ahead with Star Trek 4, yet there’s no sign of Quentin’s movie on the horizon?

Related: Quentin Tarantino’s Star Trek Can Be Great (But Only If It’s A One-Off)

A big stumbling block was almost certainly the tone of Tarantino’s Star Trek concept which, putting it mildly, would’ve been a departure. According to multiple reports, Tarantino-Trek was based on Star Trek: The Original Series season 2’s “A Piece of the Action,” which saw the Enterprise crew land in a 1930s-era gangster scenario complete with Tommy guns and fedoras. Throw in the R-rated profanity and violence Tarantino is known for, and Star Trek IV: The Voyage Home this is not. The divide between Quentin Tarantino’s vision and Star Trek tradition accidentally became clear when Simon Pegg (class of 2009 Scotty actor) played down fears Tarantino would turn Star Trek on its head, reassuring fans in 2018 that the effort wouldn’t be sci-fi Pulp Fiction. Tarantino eventually replied, “I get annoyed at Simon Pegg… If I do it, that’s exactly what it’ll be. It’ll be Pulp Fiction in space.”

That little actor/director mini-spat exemplifies just how radical a shift Quentin Tarantino’s Star Trek movie would be – and also how risky it would be for Paramount executives trying to avoid another Star Trek Beyond. The studio is currently building a catalog of Star Trek content on Paramount+, with a relatively tame Star Trek: Lower Decks the most risque item on its menu. For Tarantino to come along now and deliver a Star Trek movie that’s a wild and wacky deviation from the franchise’s core values could prove damaging to brand identity. It’s also hard to imagine Tarantino continuing any long-term emotional arcs carried through the previous three films, such as the Spock-Uhura romance. A conventional Star Trek 4 is, quite simply, the safer bet.

That’s not to say Quentin Tarantino’s Star Trek movie won’t happen somewhere down the line. Although Tarantino’s script featured the current crop of actors, his concept wasn’t written around Chris Pine’s generation specifically. Tarantino’s Star Trek would work just as well (probably better) with Kirk and the Enterprise crew recast, unshackled from previous entries. Because Quentin Tarantino’s idea was crafted as an isolated adventure, it perhaps makes sense for Paramount to pursue a more traditional Star Trek 4 now, and save Tarantino-Trek for another time, when a standalone, R-rated, time-bending Star Trek movie makes more sense. Given how far Paramount let Tarantino develop his script, the studio obviously has some faith that his “Pulp Fiction in space” reinvention will work. Maybe it’s just a matter of fitting Tarantino into the wider franchise road map.

More: Everything We Know About Quentin Tarantino’s Star Trek Movie

Seeking Sister Wife: What Happened To Ashley Snowden After Season 3