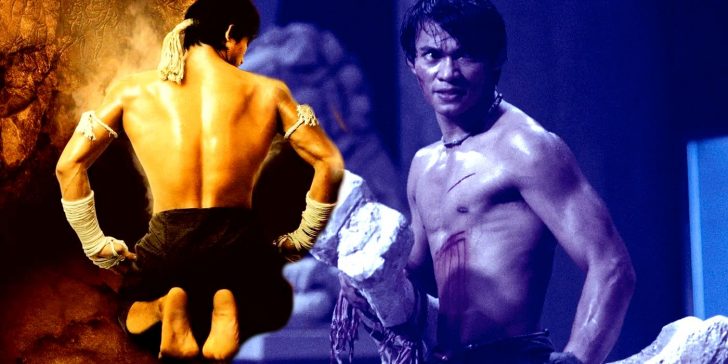 Tony Jaa is well-known for his Muay Thai skills, but for his 2005 movie The Protector, he changed his fighting style into a new variation of it.

In his second movie as leading man, Tony Jaa reshaped his on-screen fighting style for 2005’s The Protector. Thailand’s renown Muay Thai king Tony Jaa first made an impression in action films with his 2003 hit Ong Bak: The Thai Warrior. As the former stuntman Jaa’s first major role, Ong Bak left audiences around the world speechless with its wire and CGI-free stunts and martial arts action scenes. This makes the subtle shift in The Protector even more noticeable and perhaps surprising.

As Tony Jaa’s breakout movie, Ong Bak was also a major showcase of Muay Thai. More specifically, Jaa utilized Muay Thai’s most ancient form, Muay Boran, which literally translates as “ancient boxing”. Muay Thai is well-known in the martial arts world as “the art of the eight limbs”, utilizing punching, kicking, elbows, and knee strikes with its own methodology for delivering them. Jaa’s next film The Protector got in on the one-shot martial arts fight scene game early with the film’s five-minute oner, and changed some other things up.

RELATED: Why SPL 2, Not Ong Bak, Is Tony Jaa’s Most Important Film

For The Protector (titled Tom Yum Goong in Thailand), Jaa and his mentor Panna Rittikrai developed a strong cinematic martial art for his character called “Muay Kotchasaan”. The duo’s variant on Muay Thai, Muay Kotchasaan (which translates as “elephant boxing”) incorporates a wide range of grappling techniques and joint manipulations. This made the art a perfect reflection of the quest of Jaa’s character Kham in The Protector. In the film, Kham, the descendant of ancient Thai warriors, travels to Australia to rescue his two beloved elephants after they’re kidnapped by local poachers. Kham finds himself deep within the criminal underworld of Sydney, Australia, and is soon battling one set of gangsters after another in his mission to find his elephants. Given that the plot itself focusses on Jaa’s mission to recapture some lost elements. As such, the technique serves a narrative, as well as a visual purpose.

While the films of the Ong Bak trilogy were full of exotic elbow and knee strike techniques, The Protector’s fight scenes were just as spectacular in a different way. In wielding Muay Kotchasaan, with the art being predicated on elephant combative movements, Kham used his arms like an elephant’s trunk to catch opponents and break limbs. The Protector’s most famous action scene sees Kham do exactly that to single-handedly defeat one-hundred henchmen. Jaa still used plenty of kicks, knees, and flips throughout the movie and in this scene. Even so, Kham snapping his opponents’ arms and legs like twigs instantly distinguished The Protector from Ong Bak with its own unique style of action.

In addition to his skill as a martial artist, Jaa has always shown his knack at blending different martial arts harmoniously on-screen. Lateef Crowder dos Santos, later an opponent of Boyka in Undisputed 3: Redemption with Scott Adkins, would bring his skills in Capoeira to The Protector in a wild fight sequence with Jaa. Johnny Tri Nguyen and Jon Foo also matched contemporary Wushu against Kham’s use of Muay Kotchasaan, as well (Nguyen also being an exponent of Vietnamese Vovinam among other martial arts).

Jaa would continue to re-invent his cinematic fighting style in Ong Bak: 2: The Beginning and Ong Bak 3, blending a wide array of martial arts. In the time since then, Jaa has become a huge star with action films like Furious 7 and Skin Trade. Jaa’s numerous other big martial arts films include SPL 2: A Time For Consequences of the Sha Po Lang series, along with the ensemble action movie Triple Threat. Throughout his career, Tony Jaa has been a superb big-screen representative of Muay Thai. With The Protector, Jaa showed his ingenuity was equally great with Muay Kotchasaan.

Growing up, Brad developed an innate love of movies and storytelling, and was instantly enamored with the world of adventure while following the exploits of Indiana Jones, Japanese kaiju, and superheroes. Today, Brad channels his thoughts on all manner of movies, from comic book films, sci-fi thrillers, comedies, and everything in between through his writings on Screen Rant. Brad also offers philosophical musings on martial arts and the filmographies of everyone from Jackie Chan to Donnie Yen on Kung Fu Kingdom, where he’s also had the privilege of interviewing many of the world’s great stunt professionals, and hearing plenty of gripping stories on injuries incurred in their line of work and the intricacies of designing the acts of death defiance he first thrilled to as a youngster. When he’s not writing, Brad enjoys going on a ride with the latest action hit or Netflix original, though he’s also known to just pop in “The Room” from time to time. Follow Brad on Twitter @BradCurran.