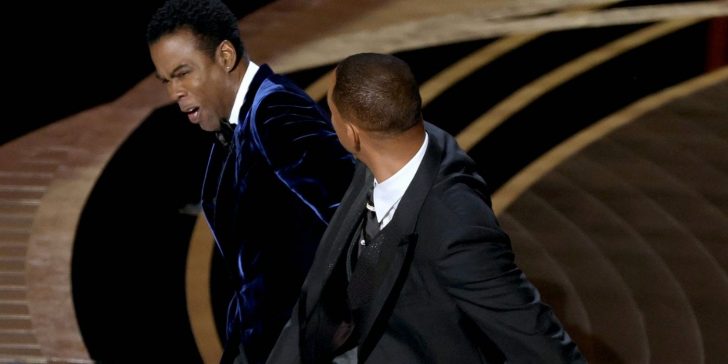 Actor Will Smith slapped actor/comedian Chris Rock on live TV during the Oscars in an unscripted moment after a joke was made about Smith’s wife.

Will Smith slapped Chris Rock live onstage during the 2022 Oscars presentation. Rock, an actor and stand-up comedian, has previously hosted the Oscars and is well known for his comedic chops. In addition to stand-up comedy and hosting gigs, Rock has starred in a number of features, most recently in the Saw reboot, Spiral. Rock also most-recently appeared in the FX series Fargo.

Smith is the star of the Oscar-nominated King Richard, for which he’s up for Best Actor. The actor was previously nominated for his performances in The Pursuit of Happyness and Ali. Smith recently released his autobiography, “Will”, and has appeared in a number of reality shows, including the NatGeo series Welcome to Earth on Disney+, as well as his The Best Shape of My Life YouTube series.

While Rock was on stage to present Best Documentary, the actor/comedian made a few jokes about the fellow attendees, one of them being Will Smith’s wife, Jade Pinkett-Smith. The joke in question was in relation to Pinkett-Smith’s short hair, comparing her to G.I. Jane. Pinkett-Smith was visibly annoyed by the joke, at which point Smith approached the stage and slapped Rock, before walking back to his seat. Rock reacted, saying, “Will Smith just smacked the shit outta me.”  Smith yelled at Rock from his seat, saying, “Keep my wife’s name out your f*ckin’ mouth!”, which he repeated twice. Rock, seemingly dazed by the reaction but carried on with presenting the award. Check out the full unscripted moment below:

Here’s the moment Chris Rock made a “G.I. Jane 2” joke about Jada Pinkett Smith, prompting Will Smith to punch him and yell, “Leave my wife’s name out of your f–king mouth.” #Oscars pic.twitter.com/kHTZXI6kuL