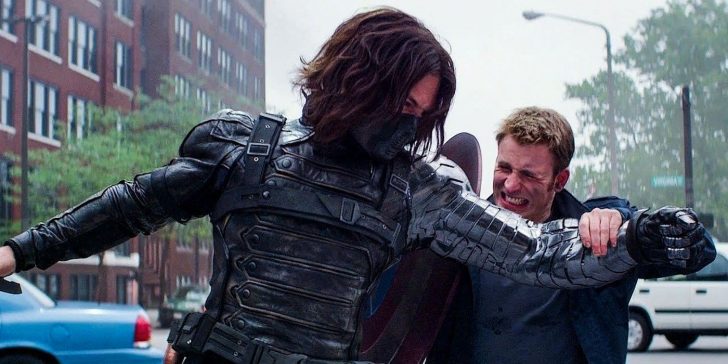 Sebastian Stan’s stunt double from Captain American: The Winter Soldier sat down with fellow Marvel stuntmen and explained the complex mechanics of one notorious fight between Steve Rogers (Chris Evans) and Bucky Barnes. Directed by Anthony and Joe Russo, Captain America: The Winter Soldier contained a shocking revelation for audiences that, despite plummeting off a mountainside in Captain America: The First Avenger, Bucky Barnes was well and truly alive, but now wore Hydra colors. With Black Widow (Scarlett Johansson) and Sam Wilson (Anthony Mackie) to back him up, Rogers confronts his best-friend-turned-enemy.

Surviving harsh brainwashing and prosthetic surgery at the hands of Hydra, Barnes emerges as The Winter Solider with a cybernetic arm and seemingly no memories of who he once was. Rogers attempts to track down the Hydra soldier after his colleague, Nick Fury (Samuel L. Jackson), is pronounced dead after encountering the mysterious assassin. When Captain Rogers finally meets The Winter Soldier for the first time in an aggressive fight defending Black Widow, he learns Bucky never died on that mountainside and is convinced his friend needs to be saved, not destroyed.

In a YouTube video from Corridor Crew, stuntman James Young breaks down that first confrontation between Rogers and Barnes. Although Marvel actors like Stan and Evans do participate in stunt work, Young says that his participation is not only helpful for shooting films efficiently, but also in keeping the production alive. He also looks back on the memorable knife flip that occurs during the fight scene, saying that he finds it funny that people are so enamored with the knife sequence even though it was shot in only three or four takes. Read more from Young below:

“It’s insurance at the end of the day, I mean, the actors will absolutely perform a lot of [the stunts] but, at the end of the day if Chris gets hit or Chris goes down, production goes down. We’re dealing with hyper-violence here and we’re keeping it safe as possible, and that’s our job is to go as close to the line as possible in the safest way. But, usually as well, I mean, with the way that we’re shooting, we’re shooting so quickly…so while I’m doing a shot here, Seb is on the other unit blowing up cars… It’s a way to get a lot of coverage done in six days.”

Young also provides insight on details from the combat, such as the decision to give Bucky the Captain America shield mid-battle, which was actually Young’s idea, saying: “The biggest thing for me was, you go through all the history of Bucky and Cap you know that eventually Bucky became Captain America so to me, that’s what this was about.” The stuntman also shares his love for the direction Marvel went with The Falcon and the Winter Soldier, which does diverge from the comic books, but still treats the shield as a complex tool that could not have been given to Bucky, because his past was too bloody. By discussing the fight with fellow Marvel stuntmen, Young gives fans a behind-the-scenes look at the experience on set for the most memorable battles, from speaking about Evans and his ability to fight, to minute choices like including Bucky’s knife flip, and even the practicality of stunt work.

Bringing Captain America: The Winter Soldier to life in a believable, visceral way takes brilliant minds like Young and the fight coordinating team to give audiences a scene that feels brutal but also carries the emotional weight of Rogers and Barnes reuniting in such a grim way. While actors are participating in their own stunt work more and more, the fighters who help behind the scenes should not go un-applauded for their contributions. From choreographing each fight, to stepping in when actors cannot risk their own safety, Marvel’s stunt teams are essential to make intense violence on screen feel as close to reality as possible.

Next: Bucky Should Return In The MCU, But Not In Captain America 4

Taylor McIntyre is a Writer for the Screen Rant News team. Based in New York City, Taylor graduated from Tisch School of the Arts and has been pursuing her career as a writer and artist since graduating in 2020. Additionally, she has been an independent film producer to help create work through the difficult COVID-19 pandemic.

Born and raised in Los Angeles, her love for the entertainment industry started with a love for performing, creating, and bringing fantasy to reality. Now, she aims to create work that sparks conversation and encourages communities to come together in meaningful, joyful ways.