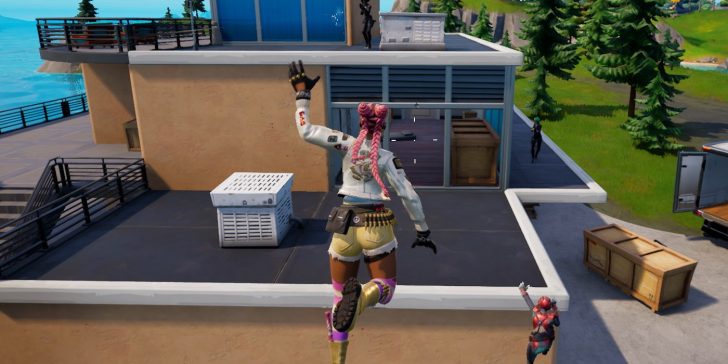 The start of Fortnite Chapter 3 Season 2 wasn’t without surprises. Aside from the usual seasonal additions such as a new battle pass and tons of missions to complete, developer Epic made the unthinkable by removing the ability to build across all modes. While this was revealed at launch, it wasn’t until I tried to build a staircase in-game by reflex that I truly understood what a big difference it made. A couple weeks later, however, I’ve gotten used to it. In fact, thanks to some new traversal mechanics, I may part ways with building for good.

In case you haven’t been around Tilted Towers recently, Fortnite traversal now allows you to sprint over short distances, gaining quite a bit of speed until your stamina depletes. Wait a couple seconds, and you can do it again. As you sprint, you can make a special jump that is more of a leap, perfect to escape from danger or to combine it with the other traversal addition, which is mantling. If you hold the jump button near a ledge, which can be anything from fences to rooftops as long as the height aligns with your character, you automatically vault it over.

It took some time to get used to the new movements. At first, I spent a couple matches still trying to build stairs or walls around me only to fail repeatedly. Then, I kept forgetting that I could sprint, which would have saved me a couple headaches when traveling on foot. And while mantling sounded interesting, I tried it with only a handful of structures and it didn’t always work. I wasn’t entirely sold on the overall approach, to say the least. But all it took was time and practice.

The preference debate around building has been around ever since Fortnite jumped on the battle royale bandwagon. Many argue that the ability to build structures is what set it apart from the beginning, and I agree. The problem, at least for me, is that some people got absurdly good at building. It’s hard to notice it during the first half of a match, but if you survive long enough to be inside one of the smaller storm circles, the island becomes occupied with a skyline of hand-made fortresses.

Sure, we have all tried to get to that level, and it’s possible with tons of practice. But the difficulty ceiling is almost as high as the towers themselves. Unless you have the means to counterattack the strategy, you’re at a huge disadvantage. I remember one match where I was using a thermal-scoped assault rifle (which lets you see the silhouette of other players even if they’re behind a wall), to attack someone inside a construction and I couldn’t get through it. They were building at such speed that it didn’t matter how many walls I tore down — there was always another being constructed soon after. I spent four entire magazines attempting to land a single shot until another player snuck up on me.

Even if you don’t have the mind of an architect, it’s far from impossible to win matches in Fortnite. So I wouldn’t call it unbalanced, per se. In my experience, building has always served as an extension of my movements rather than a tool to defend myself, as I crafted staircases to reach higher places fast and not much else. Yet, the entire removal of the feature opened my eyes to a new world of traversal possibilities where I feel in control. Mantling and sprinting go along perfectly with the previous addition of sliding on the ground that was introduced at the start of Chapter 3. And when you take into consideration the small ways in which these mechanics interact with the world — your character being able to do a small jump against a wall to reach a higher place to then vault over while mantling, bashing doors open if you sprint towards them — the traversal options set an interesting prospect for the future.

Zero Build mode has been added to capitalize on this idea, and while it’s likely that many players are just going to continue with to the core building modes, I think I’m sticking to the new direction. The feature always set Fortnite apart from other battle royales, but it’s no longer the biggest standout. As this massive interconnected world shifts with every season, I’m traversing its corners and exploring its ceilings using a different approach for the first time in years. And while I’ll inevitably end up in a playlist that involves building at some point when tagging along with friends, I finally feel capable of turning the tides to my favor.