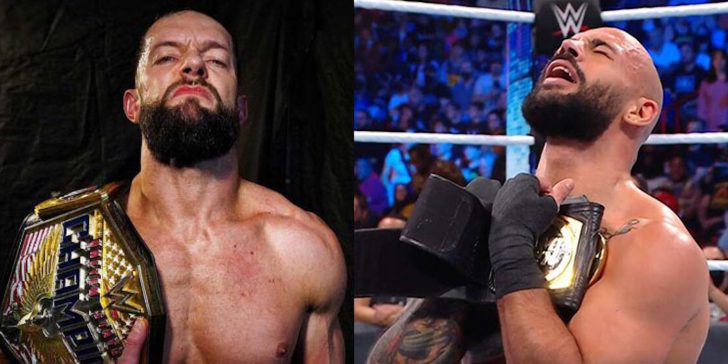 We are less than one week from WrestleMania 38, which again airs over whole two calendar nights. Last year, this format worked out great, allowing both Bianca Belair vs. Sasha Banks and Roman Reigns vs. Edge vs. Daniel Bryan to occupy main event spots. Both matches were well worthy of being main events, with Sasha and Bianca making history, and Bryan working his send off Mania match. Out of the two, the woman’s match most definitely stood out more, but at the time, seeing Edge wrestle in front of a crowd again was a treat.

All that being said, the WrestleMania 37 card still had plenty of filler. Braun Strowman and Shane McMahon, two men who are no longer with the company a year later, ran over 10 minutes in a cage match. Bad Bunny and Damien Priest actually put on a banger of a celeb match, defeating John Morrison and The Miz. And WrestleMania legend Logan Paul was in Sami Zayn’s corner as he got beat down by KO, who finds himself propping up another popular podcast host this year.

If you remember any of those matches, it was probably Bad Bunny’s, which, again, was way better than it had any right to be. And yet, with all the filler and Fiend matches we endured, there was still time for WWE’s midcard titles to be defended, even those we know the brands don’t always super care about. Sheamus defeated Riddle to become United States champ, and Apollo took out Big E for the Intercontinental belt. Neither match was stellar, but hey — it’s the biggest night of the year, you’ve gotta give something to your midcard champions. Right?

Turns out no, you do not always have to do that.

This year, neither the Intercontinental nor the United States belts are even featured on the card. A card which, just so we’re clear, features Johnny Knoxville, Pat McAfee, and Logan Paul once more. Now, I’m actually stoked to see McAfee destroy Austin Theory, but it would also be nice to have Finn Bálor or Ricochet doing literally anything to defend their titles. Instead, we get WrestleMania SmackDown the night before, with Bálor competing in the Andre the Giant Memorial Battle Royal, and Ricochet defending in a triple threat against both members of Los Lotharios. Which would be fine, I guess, if WrestleMania wasn’t two full nights and literally 9 hours long.

Look, half the time WWE forgets about the Intercontinental title entirely. We had Shinsuke Nakamura go months without defending, and much of his reign, the focus was on Rick Boogs’ shredding more than Nakamura’s opponents taking a Kinshasa. The United States Championship has faired better in recent memory, with Bobby Lashley’s lengthy and prominent run in 2020, and the build to Damien Priest’s victory over Sheamus and Jeff Hardy at Extreme Rules 2021. With that in mind, once becoming champ, Priest almost immediately vanished off screen for at least a month. A 7-8 minute match at the grandest stage of them all doesn’t feel like a massive ask. It’s not like I’m out here expecting a huge display of respect for either of these long tenured titles.

I understand that Ricochet vs. Los Lotharios is extremely important both culturally and aesthetically to me, personally, but it also has the potential to just be a very solid match all around. Ricochet’s style will work well with both men, as all three men can be high flyers and keep things fast paced. We then have the extra drama of what happens if Humberto or Angel wins; does the tag team dissipate? Do they stop being cousins? Sure, we’ll see it play out on WrestleMania SmackDown, but if the last two years have taught us anything, it’s that slapping WrestleMania as an adjective onto a show just to spice things up doesn’t really do much. Anything can be “WrestleMania” in the sense that it contains wrestling and large scale celeb appearances, alongside commentary we first heard two decades ago.

Poor Finn is getting even the shorter end of the stick, participating in the equivalent of just being in the building while the show is happening. Now don’t get me wrong, there have been some great moments during the Andre Battle Royal (who even knew who Gronk was before he stepped in to help Mojo back in 2017?) and some equally great winners. But when the CWC era Mania 36 dropped the match from the show, we found that nothing was really missing. Rarely does it involve wrestlers featured enough to have storylines, so unlike, say, the Rumble, where we await specific interactions, it’s kind of just a lot of guys yelling at each other and doing signature moves for 20 minutes. And that’s not to discount any performer in it; most of them would be well capable of putting on their own singles match, if given the time. But to stick the guy with any title that ranks above the 24/7 Championship, who had at least a couple weeks to develop his own story going into this, just feels lazy. Bálor could even hold an open challenge and take on whatever legend got paid enough to take a slingblade in Texas. There’s plenty of options here.

Instead, we’re treated to yet another reminder of how little WWE cares for either of these belts. Pushing both men onto SmackDown is more than a slap in the face, it’s just a sad look at the way creative views these mid-card championships, both of which have been held by some of WWE’s absolute best throughout their history. It’s not even a singular indictment of either Ricochet or Bálor, as it honestly seems this would have been the turnout regardless of who held the belts. But, considering who both of these men are, it actually comes out feeling worse that they couldn’t get a spot at WrestleMania. Bálor was a Mania staple, putting on multiple excellent matches with guys like Rollins and Lashley, until his return to NXT in 2020. And just a few months after debuting on the main roster, Ricochet made his Mania debut alongside Aleister Black, way back in 2019. Both men are very capable of creating big match moments, and they have the championships and prestige to back that up. So, why are they sitting in their beautiful Orlando townhomes on Saturday and Sunday night?

Maybe Finn will win the battle royal, and then he’ll have two accolades nobody writing Raw cares about. Maybe Ricochet will pin both Lotharios and send the crowd home happy. Either way, it’s happening on a show that, both within kayfabe and real life, doesn’t matter nearly as much as the granddaddy of them all. When the company can’t find room for one of these two secondary belts on a show that runs longer than the American workday, that feels like a bit of a problem. And if you’re a wrestler on SmackDown and you’re seeing these guys left in the dust, the big question should be; what’s the point of trying to gain either of these championships now?

You’d be better off challenging someone who quit wrestling 20 years ago, because then at least you’d be at the big show.