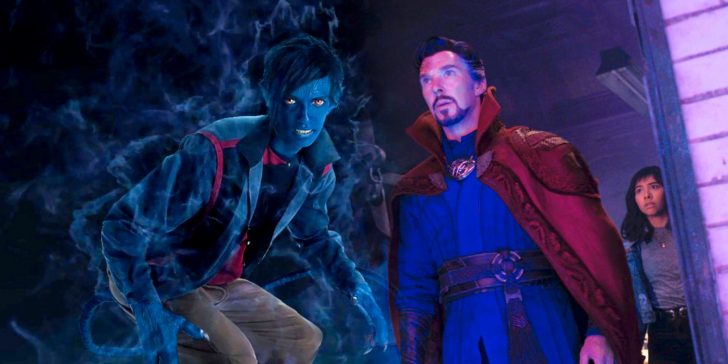 X-Men Nightcrawler actor Kodi Smit-McPhee sets the record straight on whether he is appearing in Doctor Strange in the Multiverse of Madness.

With the official opening of the multiverse in Spider-Man: No Way Home, Doctor Strange in the Multiverse of Madness is set to take the concept to a new level entirely. The first trailer for the upcoming sequel has already teased what is to come for Benedict Cumberbatch’s Doctor Strange, which includes a host of otherworldly villains and an evil version of Strange himself. Many fans have also drawn attention to what sounds like the voice of Patrick Stewart’s Professor X in the trailer, prompting many to speculate whether the Sam Raimi film will finally see the X-Men make their MCU debut.

In a new interview with Variety, Smit-McPhee weighs in on whether his version of Nightcrawler will be making an appearance in Doctor Strange 2, definitively saying that, no, he is not involved in the film in any way. Having worked with Cumberbatch on Netflix’s The Power of the Dog, Smit-McPhee explains that he tried to pry answers from Cumberbatch about the film, but, much to his frustration, had no such luck. Check out Smit-McPhee’s full comment below:

“I had this conversation with Benedict on the [Power of the Dog] set when he was still method acting as well. I was like, ‘Listen, I know you’re the dude in the boots right now with the rope, but you need to tell me, am I in the contract moving forward?’ And that guy doesn’t let out a secret. I was actually slightly insulted. He doesn’t let out a secret, he’s really protective of that stuff. I can obviously transparently tell you I have nothing to do with the universe of madness that’s coming out.”

Of course, while Smit-McPhee denies that he has any involvement in the upcoming film, it’s worth noting that Andrew Garfield similarly denied that he was in Spider-Man: No Way Home, which of course turned out to be false. Furthermore, although he has not flat-out denied that he is in Doctor Strange in the Multiverse of Madness, Stewart has cast doubt on whether it is his voice that can be heard in the trailer. That is to say, if Smit-McPhee is in the movie (or is contracted for future appearances as Nightcrawler), it’s likely that he wouldn’t be admitting it.

That being said, the story Smit-McPhee shares about his time on the set of The Power of the Dog with Cumberbatch does certainly sound true. Both X-Men: Apocalypse and X-Men: Dark Phoenix were not very well received and it wouldn’t be surprising if Marvel opted not to bring back certain characters from those movies. Furthermore, Stewart’s Professor X is the legacy version of the character, suggesting that, if other X-Men characters are to return in the upcoming Doctor Strange sequel, they will more likely be the legacy versions of those characters that proved most popular with fans. While it doesn’t sound like Smit-McPhee is in Doctor Strange in the Multiverse of Madness (or any future MCU projects), audiences will have to wait and see to be sure. Doctor Strange in the Multiverse of Madness is scheduled to release on May 4.