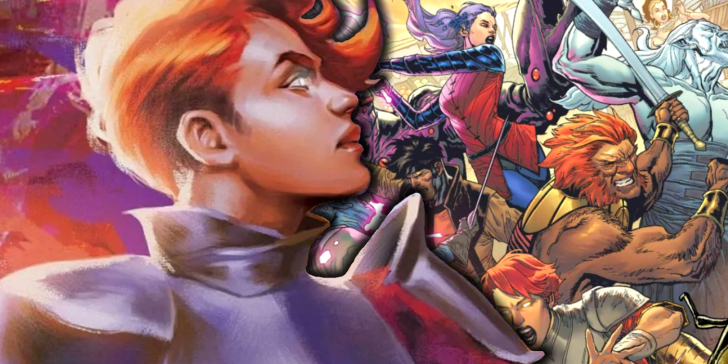 Covers for the upcoming Knights of X #2 highlight the iconic but under utilized Rachel Summers, as well as the return of Kylun from classic Excalibur.

Gorgeous new art for the upcoming Knights of X series, a spin-off of the recently ended Excalibur run, shows off two X-Men mutants who are rarely given the spotlight, Rachel Summers (Prestige) the alternate reality daughter of Cyclops and Madelyne Pryor, and Kylun a cat-like mutant from the original 1980s run of Excalibur that has not been featured in decades. Knights of X follows a group of mutants trapped in Otherworld tasked with saving that reality from the evil forces of Merlyn and King Arthur, and it appears like Rachel and Kylun will finally get to take center stage, while wearing legendary new medieval outfits.

Rachel Summers comes from the Days of Future Past reality, and while her character has gone through tremendous growth over the past 40 years, she has rarely taken the spotlight and is an often underrated character. Kylun debuted as Colin McKay, and while he went on many adventures with Excalibur over the years, he has not been seen in any type of major role since the early 90s. Rachel is an incredibly powerful telepath who has hosted the Phoenix Force on several occasions while Kylun is a skilled fighter who has the ability of “sound mimicry,” allowing his vocal cords to replicate any sound that he hears. Not only are the new Lord of the Rings-esque style Otherworld costumes for these Knights of X characters simply iconic, but it is high time that both Prestige and Kylun are more appreciated by the Marvel Universe and its readers.

Knights of X – written by Tini Howard with art by Bob Quinn – spins directly out of Excalibur, with Betsy Braddock assembling a team of medieval-styled mutant knights to fight against Merlyn and his magic-imbued Sentinels, called “Furies,” as well as an army of Otherworld beings. Marvel’s preview for Knights of X #2, whose beautiful cover is drawn by Yanick Paquette, shows Captain Britain, Gambit, Rachel Summers, and Kylun fighting against several vicious beasts. The variant cover for the same issue, shared exclusively by AIPT and gorgeously illustrated by Mateus Manhanini, depicts Betsy and Rachel fighting side by side, highlighting Summers as a wildly powerful mutant with cosmic connections in what appears to be the first lieutenant role of Braddock’s Knights of X.

Rachel and Kylun are perfect additions to the team because both of them were on the original Excalibur and have spent extensive time in Otherworld, so their knowledge of the fantasy world will come in really handy. While Kylun’s power might not seem like an especially useful ability, it was his creativity and bravery that allowed him to use his power to save his friends and Excalibur teammates several times. Tini Howard has already brought several Alan Davis characters back to mainstream continuity, so it is no wonder that Howard continues to capitalize on nostalgia. Plus, Rachel Summers has recently been sidelined as “just another Summer’s kid,” whereas Kid Cable has a whole book dedicated to his adventures, so it seems right that Rachel is finally going to be in the spotlight.

Besides the joy of seeing Kylun back in action and Prestige getting more attention, the updated costumes for the Knights of X are gorgeous, and it was a great creative decision to not have them wear their traditional X-Men gear in their Otherworld adventures. Howard recently revealed when talking about Knight of X that there would be two surprise additions to the team and hopefully Kylun is one of them. Knights of X is shaping up to be one of the most unique X-Men titles in the upcoming “Destiny of X” era, and hopefully Rachel and Kylun’s addition to the team’s roster will not only help Captain Britain and Excalibur save Otherworld and Avalon, but will also highlight how these two characters should be better appreciated.

Iron Man Needs To Have Children, And Even Marvel Knows It

Alex Schlesinger is a freelance Comics News writer for Screen Rant. While his career is in social work, one of his biggest passions is reading and writing about comic books. While Alex loves to write about all things comics, the X-Men will always hold a special place in his heart.

Alex lives in Seattle with his fiancé Zach and their two cats Jasper & Harley. When not writing Comics News he is cooking, baking, reading science fiction, and travelling around the Pacific Northwest.