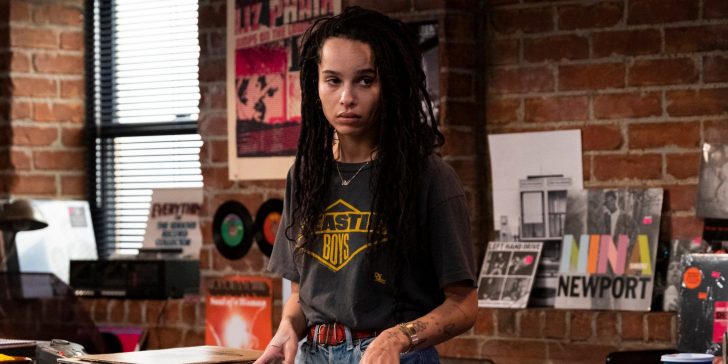 Zoe Kravitz says that Hulu canceling her show High Fidelity was a mistake that disappointed the many fans who identified with her character.

Zoë Kravitz speaks out again against Hulu’s canceling of her 2020 show, High Fidelity. The show first premiered in February 2020, offering a brilliantly relevant yet referential update of the 2000 film, which was adapted from the 1995 British novel of the same name by Nick Hornby. The original film, High Fidelity, starred John Cusack (and notably featured Lisa Bonet, the mother of Kravitz herself) and became an instant classic, with fans and critics especially praising Cusak’s portrayal of the lovable but petulant lead character.

In Hulu’s bold gender-bending update, Kravitz plays the lead character, Rob– an indie record-store owner in New York City with an encyclopedic knowledge of music, but not so much expertise in romance. Kravitz’s Rob is fierce, funny, whip-smart, and often an emotional trainwreck, unable to move on from her dashing ex-boyfriend Simon (played by David H. Horne) but also unexpectedly taken with the sweet Clyde (played by Jake Lacy). Drenched in pop-culture references, incredible musical stylings, and complexly written characters that vividly embody the struggles of young adulthood, High Fidelity offered something truly unique in terms of storytelling and representation. Naturally, the heartbreak of adoring fans ensued after Hulu canceled the show after only one season in August 2020.

In her recent interview with Elle magazine, Kravitz lamented the cancellation of the show, relating that it disappointed not only herself and the cast but also the countless fans of the show who connected with its skillfully-written characters, diverse and carefully curated soundtrack, and witty dialogue. Fans also found a deep sense of reflection in High Fidelity’s representation of groups that mainstream television has historically marginalized or misrepresented, such as people of color and members of the LGBTQIA+ community. Read what Kravitz said below:

“They [Hulu] didn’t realize what that show was and what it could do…The amount of letters, DMs, people on the street, and women that look like us—like, that love for the show, it meant something to people. It was a big mistake.”

Kravitz’s sentiments here corroborate her previous statement made when Hulu first announced High Fidelity’s cancellation. Shortly after the news broke, she posted a tweet noting that High Fidelity was one of the only shows on Hulu centered around a woman of color, sardonically pointing out the sad irony of the show’s cancellation. Kravitz’s concern speaks to the wider and increasingly pressing issue of representation in media that extends far beyond Hulu, though, as networks and studios in all corners of the industry are grappling with lack of diversity in their content and the deeply problematic implications of such exclusionary storytelling.

High Fidelity’s cultural significance lies in its ability to unabashedly portray a woman of color with love, complexity, and nuance. To so fearlessly update an iconic film like High Fidelity, which originally centers around a white man, with Kravitz’s Rob is an unapologetic gesture of defiance brilliantly combined with a cinematic reverence. The show possesses an uncanny ability to elicit empathy and identification with the character from the audience, even when she’s being selfish or angry or making mistakes, rendering a realistic portrait of a flawed woman – a fresh contrast to the monotonous one-dimensional female characters often portrayed on television. The tragedy of High Fidelity’s cancellation, and the importance of Kravitz continuing to speak out about it, lies in the loss of this inter-sectionally feminist representation and the identification viewers felt from it.

Next: The Batman: How Zoe Kravitz’s Catwoman Can Beat Michelle Pfeiffer’s